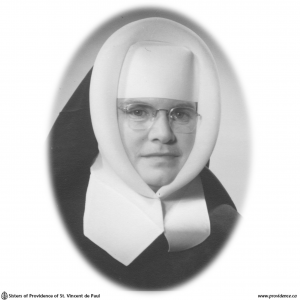 “If we desire to obtain anything from God let us ask His Spirit; because this Divine Spirit is the life of our souls.” St. Vincent

No matter what request for prayers was presented to Sister Mary Coletta (Quinn) and no matter what problem she was facing, her approach was always the same, “Let us ask the Holy Spirit.” In this she was truly a follower of St. Vincent, as the opening quotation shows. In other ways, too, such as her dedicated service, her hospitality and her patient sharing in Christ’s passion, she lived to the full the charism of the Sisters of Providence of St. Vincent de Paul.

Anna Dolorosa Mary Quinn was born at Cardinal, Ontario, on October 14, 1912. Her father, Michael Henry Quinn, was a farmer, who had been born at Prescott and raised his own family on a mixed farm part way between that town and Cardinal. His wife, Eleanor (Nellie) O’Neill was a diligent mother to their eight daughters and one son. Since the children received their education at a small public school just across the road from the farm, the mother gave them their catechism lessons herself. In the evenings the family entertainment was often to listen to some fine tunes from father’s violin. Although Mr. and Mrs. Quinn died within months of each other in 1948, most of the children are still living – Madeleine having been the only one to die before Anna.

Anna was the second oldest of the siblings. After a few yeas of high school at Prescott, she worked for a while at housekeeping and then decided to pursue her intention to become a religious Sister. In the summer of 1931 she visited Mother Mary Ursula (Byrne) at the House of Providence and “personally intimated” the desire she had had for some time. The following February she wrote asking permission to enter. Her pastor, Father M. E. James, drove her in his car to Kingston to enter on March 18. Before the end of that month she had three classmates, with two of these also coming from the far eastern corner of Ontario.

At first profession in 1934 Anna became Sister Mary Coletta. Her patron was that great reformer of the Franciscan order, Saint Colette of Corbie, and she kept among her “treasures” an account of the life of this remarkable woman, a visionary, mystic and ascetic. Sister Mary Coletta, like Saint Colette, was very small in stature. The saint prayed to grow tall and actually did; Sister was destined to stay short in size and to follow a more ordinary path, yet somehow, she too was noteworthy. The Sisters who knew her find it hard to describe exactly what it was, but as one said, “She was very much taken up with prayer.” Sister Marry Coletta understood well, also, that holiness is possible even in small things and she took for her second patron, Saint Therese of Lisieux. Her favourite picture of this saint showed her as a sacristan arranging the chalice for Mass. This privileged task Sister Mary Coletta was to perform often herself in the years ahead.

After taking her vows, Sister Mary Coletta’s first assignment was to be cook and housekeeper for the few teachers stationed at Apple Hill. Conditions on small missions in those days were quite primitive and early in 1935 Sister’s health broke down and she had to be hospitalized in Smiths Falls. When she was at the House of Providence in 1936 she was still not well, yet her superior reported that she had “given satisfaction by regularity, devotedness to duty, being especially kind to the sick and helpless, doing all that seemed possible to please the patients”, and so, she was allowed to make her final profession. Humbly acknowledging that “her many shortcomings and her ill health” had placed her future in jeopardy, she thanked the Superior General “heartily for this great favour” of continuing her service as “a true daughter of St. Vincent”.

While at Providence Manor, Sister Mary Coletta helped with the sacristy work at the Cathedral and also began to learn, ‘on the job’, the rudiments of bedside nursing. Handwritten notebooks testify to her efforts to make her own the knowledge needed by a good practical nurse. Accordingly, her first posting after final profession was to St. Francis Hospital in Smiths Falls.

In the years from then to her retirement from full-time duty Sister worked at one or other of these first occupations – housekeeper, sacristan, nurse. She was assigned to Newmarket,, Brockville, St. Mary’s of the Lake, St. Joseph’s Hospital in Edmonton, and finally Heathfield. In Newmarket working conditions for a housekeeper was particularly difficult. The Sisters shared a dwelling with some townspeople and food sometimes had to be carried outside the house to take it from the kitchen to the refectory. In Brockville, Sister had the night shift for several years. This even meant using the same bed as her counterpart who worked days. It is reported that “her willingness and humility in accepting this work even though lacking formal training were remarkable”. In Edmonton she worked hard helping to care for mentally handicapped Indian children, as well as assisting in the cafeteria and with the housekeeping in the convent area.

In 1968 when Sister came to Heathfield her assignment was to be sacristan and to take charge of the priests’ dining room; but, by the mid 1970’s she was no longer able for this and took up part-time work in the Sisters’ dining room. It was not until 1985, however, that she entered full retirement.

For the last fifteen years of her life Sister Mary Coletta suffered from Meniere’s disease, a painful affliction of the inner ear which caused her frequent headaches and constant dizziness. It is quite possible that she had carried this burden for many years before it was accurately diagnosed. In any case, there was no cure and little relief from the symptoms. Bronchial asthma added to her difficulties.

When her hours of work were diminished, Sister had more time for one of her favourite occupations which was observing people and making new friends. She gave a most hospitable reception to all visiting Sisters and guests in the dining room and was often seen checking into their needs elsewhere in the house. Many times, too, she sat with dying Sisters. It was then she noticed that “the dying are not really listening to others all around. They have their eyes on God and go straight to Him”. This, she felt was a good example for all of us to follow.

Much devoted to the Holy Eucharist and to the Mass, Sister Mary Coletta would picture the priest as Christ in His passion. If from her astute observations she concluded that any celebrant was somewhat distracted, she would endeavour on that occasion to assist him by her prayers.

In the winter of 1986 a particularly bad flu was prevalent. Many elderly Sisters who were not very mobile and had other ailments to contend with, found it difficult to fight. Like several others, Sister Mary Coletta developed pneumonia. She was near death when hospitalized on February 1. Two of her sisters, Mary and Loretta came from Ottawa to be with her. After a week or so, though, she was well enough to return to Heathfield and her sisters left for their home. On the evening of February 16, while sitting in her Infirmary room, Sister took a heart attack and passed away very quickly.

After the traditional rosary opening of Sister Mary Coletta’s wake, a number of Sisters gathered around the casket. There was a gentle, homey feeling, a light touch of sanctity in the air. Someone said, “We’ll miss her! She was always around.” Everyone agreed and seemed very moved by her sudden departure from us.

The funeral Mass on February 19 was concelebrated by Archbishop F. Spence, Msgr. J. G. Hanley, Rev. T. Raby, Rev. D. Clement, Rev. J. Rozon, Rev. P. McAvoy and Rev. L. Byrne. The homily was given by his Grace. As the procession left the chapel, Sister Patricia Ann Ryan sang, “Spirit of the Living God” and we believe Sister Mary Coletta is still invoking Him for us.