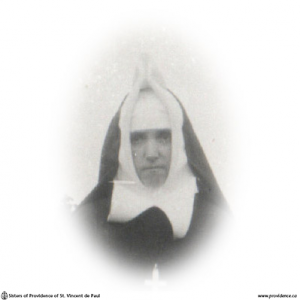 Not having any separate school in Daysland, Sister was chosen by her Superior to teach Catechism and Christian doctrines to the children and many adults for their First Holy Communion and Confirmation and this work, like all the rest of the work she was given to do, was done thoroughly and well, and it was very edifying to see twenty-five of these little children reciting the Rosary beside the remains of Sister, for the repose of her soul.

During her Religious life, she worked in different offices, and nothing was too menial or hard for her to do, she was generous to a fault and a devoted Sister of Charity to the poor and infirm, leaving nothing undone to relieve them in any way.

On Thursday, March 16th Requiem Mass was sung by Rev. Father R. McKenna, D.D. in the Sacred Heart Chapel, Providence Hospital, Daysland. On Friday morning the remains was brought by train to Edmonton.

The funeral was held from the Chapel of Our Lady of Sorrows, St. Joseph’s Hospital, requiem Mass being celebrated by Rt. Rev. Mons. Nelligan, V.G. assisted by Rev. D.W. Martin, as deacon and Rev. Father F. Gillis, as sub-deacon.

Josephine entered the congregation as a Tertiary Sister in 1899 and was known as Sr. Josephine. Tertiaries were auxiliaries who performed domestic labour and were part of the Congregation from 1895 to 1907, when the program was phased out and they were invited to enter the novitiate. She entered the Novitiate on November 21 1907.