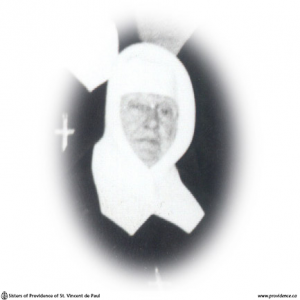 Sister Mary Columba, well known in Kingston city and archdiocese, died at Hotel Dieu Hospital on January 6, 1970. Born in County Galway, Ireland on October 21, 1883, the daughter of John Hyland and Mary Guilfoyle.  Mary Brigid was baptized three days later in the parish church of Portuma. When she was still a teen-ager, her mother died and she and a sister Marcella and the brothers John and Francis came to Kingston in 1889 to live with a relative whom they called Aunt Annie Tooher. Three years later Mary Brigid entered the novitiate of the Sisters of Providence.

On making profession in 1904 as Sister Mary Columba she was enrolled in the Training School for Nurses at St. Vincent de Paul Hospital, Brockville. After graduation she was assigned to St. Francis Hospital, Smiths Falls, for one year,  then to Brockville for nine years. The remainder of her long religious life was spent in Kingston, either at the House of Providence or St. Mary’s of the Lake. She was on active duty at St. Mary’s when she celebrated in 1964 the 60th anniversary of her profession.

Shortly afterwards, as the result of a fall in the Dowd Home in Montreal where she was spending a vacation, she suffered a fractured hip and was admitted to St. Mary’s Hospital in that city. The doctors here had no hope that she would walk again, but they reckoned without their host; as one of her nieces said, “They don’t know Aunt Columba.” When discharged from hospital she was brought by ambulance to the infirmary at the Motherhouse but she did not remain inactive. She persevered in her efforts at self therapy until she was able to walk alone, and for two or three years to come to the chapel for Mass. Her general health then weakened and for the last few years she was confined to her room.

On November 26, she suffered a weak spell when we believed she was dying. She received the Last Sacraments and Sister Bonnie Rayner remained with her during the night. In the morning she was slightly better, but on the 29th she became jaundiced and the doctor had her admitted to hospital. Surgery disclosed malignant trouble and we knew she could not live much longer. For the next week she suffered a great deal from pain and weakness, and at 6 p.m. January 6th a call from the hospital said that she was very low. Sister Marion, Assistant, and Sister Mary Alban went in at once and were there only a few minutes when Sister died. Her sister-in-law Mrs. Charlotte Hyland and her niece Marcella were also with her and Sister Taggart of Hotel Dieu staff was reciting the prayers for the dying.

As an autopsy was asked for by the doctors, the body was not brought to Heathfield until the evening of January 7th. On that evening and the following the Community and Sister’s family joined in a Bible vigil for the repose of her soul.

The funeral took place in the chapel of the Immaculate Conception, “Heathfield” on January 9th when the Archbishop (Wilhelm) and Monsignor A.J. Welsh concelebrated the Mass and Father Buckley, chaplain, Monsignor Bernard Walsh, Father Keyes and Father Lrche were present.

Sister’s sister Marcella, a registered nurse had predeceased her, as well as her brothers John and Francis; the latter as Father Hyland was a former teacher at Regiopolis College, then rector at St. Mary’s Cathedral and later pastor at Brewer’s Mills and Madoc.

Sister Mary Columba kept the community alive with her Irish wit, sometimes a bit caustic; but she was an excellent nurse and with the sick attentive and kind.