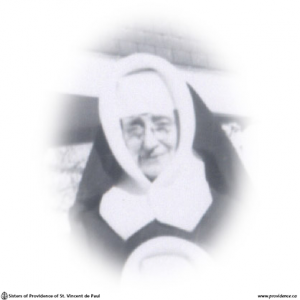 Sister Mary Consilii died at the Marian Infirmary, “Heathfield” after a lengthy illness, on Friday evening, June 5th, Feast of the Sacred Heart.

A native of Sterling, Ontario, she was the daughter of Mr. and Mrs. Wm. Foley of that locality. Sarah Foley, as Sister was known, entered the House of Providence, Kingston when quite young, and became a member of the “Tertiary Order” (later incorporated into the Community) and spent some years in that capacity until admitted to the Novitiate in 1907. In 1909 she made profession and had the privilege of being numbered among the jubilarians who were observing their fiftieth anniversary at the very time of her death. Sister Mary Consilii seemed to live just for that, as her agony was unusually prolonged, and her death expected all the previous week. The official opening of the jubilee had taken place, followed by Benediction at 5 o’clock. It was the Feast of the sacred heart, and without any particular expectation of death, our dear saintly Sister M. Consilii passed peacefully away about twenty minutes to seven o’clock.

In his sermon on the morning of the jubilee, Rev. C. MacDonald, C.Ss.R., paid special tribute to Sister M. Consilii  when he said: “She would not want us to feel sad over her passing; she would have the mind of the saints in religious orders, who look on death with joy. Let us hope she is looking down on this celebration.”

Apart from some years in Brockville, Moose Jaw, and Winnipeg, Sister Mary Consilii was nearly thirty years “House Mother” and idol of young lady boarders at Rosary Hall, Edmonton. Her life there and elsewhere might be summed up as one of kindness, charity and devotion to duty, with never a frown to mar the serenity of “a life hidden in God, with Christ Jesus.”

Burial took place, in the new plot, next to Mother M. Dorothea, in St. Mary’s Cemetery. Father Hendrikx blessed the grave and recited the prayers. R.I.P.

From the time she entered, Sister had spent sixty-three years in religion.

Sarah Foley entered the congregation as a Tertiary Sister in 1896 and was known as Sr. Sarah. Tertiaries were auxiliaries who performed domestic labour and were part of the Congregation from 1895 to 1907, when the program was phased out and they were invited to enter the novitiate. She entered the Novitiate on November 21 1907.