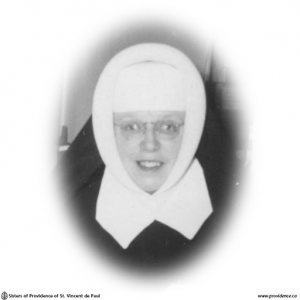 Mildred Helen Stroud, daughter of Major William Allan and Mrs. Stroud, a well-known Kingston family, was born on August 14, 1899 and baptized two weeks later in St. Mary’s Cathedral. She was educated in the separate schools of the city and Notre Dame High School.

At the age of sixteen she entered the Novitiate of the Sisters of Providence and on January 22, 1917 made profession as Sister Mary Constance.

After graduation from Ottawa Teachers’ College she taught for a few years in primary grades of St. Mary’s, Kingston;  Arnprior and Gananoque and was then transferred to the western missions. She completed qualifications for an Alberta certificate and taught for ten years in Edmonton. Another three years she spent in Winnipeg, where our Sisters conduct a school for underprivileged and emotionally disturbed boys. In 1946 she was recalled to Ontario.

That year a parish was founded at Batawa for a settlement of new Canadians from Czechoslovakia, and a separate school district was organized so that the children could learn the language of their adopted country without neglecting the study and practice of their faith. Sister M. Constance, with Sister M. Dorothea as companion, took charge of two classes in the basement of a little frame church, thus laying the foundation for the present modern Sacred Heart School of six classrooms.

Two years later Sister was called to an apostolate to which she would devote the remaining twenty years of her teaching career. The love and patience and talent she displayed at Winnipeg and Batawa in dealing with exceptional children, those handicapped by intellectual, emotional or language problems, led her Superiors to send her for courses in auxiliary education and later assign her to this work in Kingston. During the summer vacations she continued studies until she obtained a specialist’s certificate in auxiliary education. After forty-seven years of teaching she retired in 1968, the year she observed the Golden Jubilee of her religious profession.

Sister M. Constance’s contribution to education went beyond her own classroom. She was a member of the executive of Kingston Unit of the International Reading Association; was presented with an award for fifteen years’ work with the Red Cross Society; served as Local President of the Ontario English Catholic Teachers’ Association and as a member of the Education Committee of the Association for Retarded Children. Mr. B. A. Hoy, Superintendent of Schools, in a letter expressing good wishes on the eve of her retirement wrote the following appreciation of her service:

“I have entered on you official records: “Distinguished career”. And what does that mean? It means a life and teaching service distinguished by a true love of children. It means a professional attitude which has inspired other teachers to work toward the more essential goals in teaching. It means a willingness to work with all, in and out of the schools, for the improvement of our community life. This spirit of yours has had a permanent effect on numberless fellow-members.”

The Separate School Board paid a warm tribute to Sister after her retirement when they dedicated to her name a new library and resource centre at St. Patrick’s School (where she had taught the auxiliary class).

Her health, never robust was now declining noticeably and after three years of light duties in Winnipeg and at the Mother House, she was in 1971 admitted to the Marian Infirmary. On December 14, she contracted pneumonia and was taken to Hotel Dieu Hospital. On January 1 about 10.a.m. a message came from the Hospital that she was not so well.  Sister M. Alban went at once. Immediately after dinner Sister Grace Maguire was to relieve Sister M. Alban, but before she reached the hospital Sister M. Constance very quietly breathed her last.

Sister’s sister, Mrs. S.A. McNeight (Constance) from Wilmington, Delaware, and her brother Ted Stroud and his wife Rose, her sister-in-law, Mrs. Catherine Stroud with her two children Carstan and Suzanne from Toronto attended the Funeral. Her only other surviving brother, Earle, was unable to come.

Among the many persons who came to Heathfield to pay tribute to Sister M. Constance were: members of the School Board, Inspectors and Superintendents of Schools, members of the Catholic Parent Teacher Association of St. John and St. Patrick’s Schools, and principals of three of the public schools of the city. These last-named men and had worked with Sister on different committees and all spoke in the most commendatory manner of her interest in so many aspects of education and in the contribution she had made to all of these.

No tribute, however, was more moving than that of a young teen-age boy who had been one of her cherished group of slow learners. As he stood by the casket, with tears in his eyes and his voice, the boy said: “I loved Sister”.

Surely He Who said, “As long as you did it for one of these the least of my brethren, you did for me” has said to Sister M. Constance, “Come, blessed of my Father”.