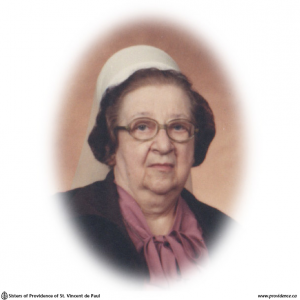 Anna Louise Christina Schauenberg was born on August 22, 1914, the daughter of John Christian and Louise Margaretta Bieber, pioneer farmers of the Verwood District in Saskatchewan. She was the only girl and the oldest of four.

Anna Louise received her primary education at Moose Pond School, Verwood, and later attended a convent school run by the Ursuline Sisters at Vibank, SK. She asked admittance to the Novitiate of the Sisters of Providence in 1932 but said that she was unable to enter until her second brother finished his studies the following year. She entered the Congregation in 1933 and made her first profession on August 15, 1935, taking the name of Sister Mary Cornelia. After first Profession, she went to Moose Jaw to attend the convent of Sion to finish her high school education and to undertake training as a laboratory technologist.

After receiving her Laboratory Technologist Registration, R.T., in 1937, Sister took over the Providence Laboratory in Moose Jaw in a basement room of the building with one student to assist her. In 1939, the laboratory expanded to two rooms where Sister M. Cornelia continued to train one and two students at a time. In the following forty-two years, she saw the department develop until the present lab at Providence Hospital opened in 1951. She received her advance registered technologist, A.R.T., in 1952, and the School of Medical Technology of Providence Hospital was recognized nationally. Meanwhile, Sister M. Cornelia concluded her own studies and obtained her Licentiate in 1961.

The first graduation exercises of 9 students were held in 1952. Since those days, many hundreds of students passed through Sister’s hands and a number still work in Moose Jaw laboratories. In 1976, students from the Union Hospital began to come to Providence Hospital to undertake specific parts of their training.

Sister M. Cornelia enjoyed her work, especially with students. She greatly impressed many generations of them who remember her as that redoubtable, indomitable, inflexible, all-knowing, awe-inspiring “essence” in their lives that still remains with them. She frequently challenged her students and the most rambunctious of them soon realized that they had come up against the “mother of them all” when they tangled with her. Her various explosive outbursts often caused as much as a surprise effect as did the words themselves.

Many other personages in Saskatchewan and elsewhere also knew that, if they were against Sister M. Cornelia for any reason at all, they might as well just give up and go home. She was and is a famous personality on the tip of the tongues of every one from Cabinet Ministers down to ‘freshie’ students.

Over the years, Sister unselfishly devoted her life to the laboratory at Providence Hospital in both a working and teaching capacity. She also devoted much time and effort to the Canadian Society of Laboratory Technologists, holding various offices locally, provincially and nationally.

Sister M. Cornelia retired as Director of the Laboratory in 1979. She continued to be actively involved with Providence Hospital, St. Anthony’s Home and the future Providence Place. She served as recording secretary for many hospital meetings and as historian and board member. Sister was most active in the Providence Hospital Auxiliary and was the editor of the provincial news letter “Info-Deluge” for which she spent many hours accumulating information for the paper and overseeing its publication.

The Canadian Society of Laboratory Technologists gave Sister M. Cornelia national recognition twice for her significant contributions. In 1972, the Society warded Sister M. Cornelia Honorary Membership and, in 1979, the year of her retirement, she was cited for Honorary Membership as follows: “Whereas Sister Mary Cornelia has demonstrated the qualities designated in the Society’s Motto ‘Usui sum Semper’ and whereas she has, by her dedication and devotion, encouraged and strengthened the profession of Laboratory Technology”. The Award of Merit was established in 1977 and term of reference is as follows: “The award is made to a nominated member who, in the opinion of the Canadian Society of Laboratory Technologist’s Board of Directors, has made significant contributions to any level of society affairs and/or to the field of medical technology over a period of time. The contributions shall exceed those expected through the responsibilities of their position or office.” Sister’s Saskatchewan Associates felt that her contribution to medical technology in Saskatchewan warranted a nomination for the award, a decision endorsed by the Awards Committee and the Board of Directors. She was awarded the Fellowship of the Canadian Society of laboratory Technologist in 1985.

During the last few years of her life, Sister M. Cornelia suffered from osteoarthritis and diabetes and had to use an electric medi-chair. She died June 4, 1993, at Providence Hospital, Moose Jaw in the 60th year of her religious life. The passing of Sister M. Cornelia marks the passing of an era. Her life was committed to acquisition of knowledge, dedication to humanity, personal integrity, continuity of purpose, faithfulness to her career, life, friends and family.

At the prayer service, Dr. Farquhar’s eulogy eloquently summed up Sister M. Cornelia’s life. Reverend P. Luttmer presided at the funeral liturgy and delivered the homily in the Church of Our Lady, Moose Jaw.  Reverend M. de Pores assisted Father Luttmer. Her brothers, John and Bernard, and their families joined in the celebration of her life.  Interment was in Mount Hope Cemetery, Assiniboia, SK.