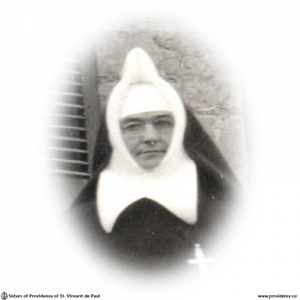 Sister Mary Cyprian died on Saturday morning, February 9th in the Marian Infirmary, Heathfield. The former Elizabeth O’Halloran was born in Charlottetown, P.E.I., and resided there until she entered the Novitiate at the House of Providence, Kingston. Sister came of a large family and from a good Catholic home where the children had the benefit of an education above the average for youth of that day.

Sister’s early religious life was spent in teaching. She taught in the schools of Perth, Belleville, Arnprior and Smiths Falls. In later years when no longer teaching she helped in various ways at the House of Providence and made herself useful in any work that came her way. She was of a happy cheerful disposition, and blessed with a good community spirit which endeared her to her Sisters in religion.

When failing health obliged her to retire from active duty Sister would find a way to keep busy, and was fond of knitting which filled up every spare moment until she could no longer concentrate or hold the needles in her hands. Since coming to the Infirmary in 1954, she had been gradually failing mentally and physically, and although not suffering pain she grew weaker day by day. She had every opportunity hereto prepare for the final summons which came suddenly at the last.

The morning she died some of the Sisters heard her moaning on their way to Mass and seeing a change for the worse they decided to remain with her. It was a fortunate decision, as they were there praying with her and at the same time following the Mass on the loud speaker, when she passed peacefully to her reward about the Consecration of the Mass.

Archbishop O’Sullivan, a good friend of Sister M. Cyprian, offered Solemn Requiem Mass for the repose of her soul the morning of the funeral. The Mass was offered in the Chapel of Our Mother of Sorrows, House of Providence, because our Chapel here at the Mother House was being painted and could not be made ready to accommodate a Funeral Mass. No immediate relatives survive and the distance was too great for her nieces who live in P.E.I. to attend the funeral.