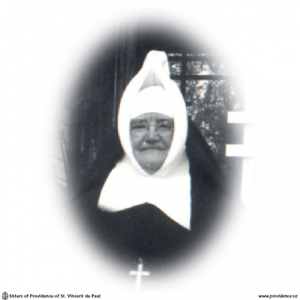 Mary Gertrude Bolger was born in Springfield, Mass, the daughter of Mr. Philip Bolger and Catherine Coughlan. She entered the Providence Novitiate Kingston, May 26, 1898, and was professed two years later. She was then sent to St. Vincent de Paul Hospital, Brockville, to train as a nurse.

Following her graduation at St. Vincent’s she was appointed to Smiths Falls when St. Francis Hospital was in its infancy. From the beginning her work was not confined entirely to the care of the sick; as she was often called on to attend to other pressing duties. Thus it was that she found herself in the office where her talent for the work was soon recognized. Her executive and business ability, combined with a cheerful friendly manner, were valuable assets, as secretary-treasurer. In this capacity she served down the years, three of which she had the added responsibility of being local Superior of the Hospital, until her illness in 1943.

For twelve years Sister M. Cyril had been a patient suffering from a stroke, but it never impaired that keen mind nor lessened her interest in the patients or the development of the hospital. Sometimes the pain or weariness was hard to bear, but no complaint escaped her lips – “I must not complain – God’s will be done” were the words so often repeated by her. While on her sick bed in 1951, Sister happily celebrated the golden jubilee of her religious profession, and last year it was a great joy for her to see and take part in the golden jubilee of the Hospital.

At her death, the citizens of Smiths Falls, paid well deserved tribute to one who had been so long in their midst, and the esteem in which Sister Mary Cyril was held, was manifest in the many Spiritual Offerings received, as well as the number of visitors who called to pay their respects and pray for the deceased. In the evening the Children of Mary and members of the C.W.L., took turns in reciting the Rosary around the bier at the Hospital. On Friday morning Requiem High Mass was sung by the chaplain Father O’Donnell after which the remains were taken to Kingston for burial on Saturday.

At 9 a.m. on Saturday, Solemn Requiem Mass was offered at the Mother House, “Heathfield” in the Chapel of the Immaculate Conception, by Right Reverend J.G. Hanley, assisted by Father Hendricks and Father Spence, as deacon and sub-deacon. Present in the sanctuary were Msgr. Leacy, Msgr. Byrne, Fathers Agnew and Ainslie. Burial was in St. Mary’s cemetery. Father Flurey recited the prayers at the grave.

The only surviving immediate relative is a twin brother, Joseph, living in Springfield, who was unable to attend the funeral.