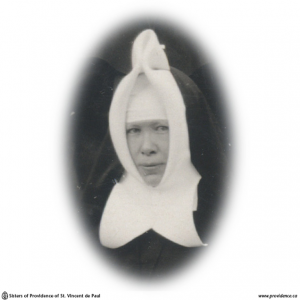 Sister Mary Damian died early Friday morning, Jan. 31st, between five and eight o’clock at the Marian Infirmary. When Sister went to her room with her breakfast around 8 a.m., she was shocked to find Sister M. Damian dead. The night Sister reported that she had been to see her at 5.a.m. and found her all right.

Less than a week before on Saturday night while taking a bath, Sister had a severe heart attack. The priest was called and Father Lynett came at once from the Archbishop’s House and anointed her about 10.30 p.m. After she received the last rites of the church Sister was very resigned and in the days that followed expressed the wish to die while she felt so well prepared. Her condition was not considered too serious or alarming in view of her long illness from heart trouble and other complications which brought her to the point of death more than once. Yet the suddenness of Sister’s passing was of much concern to her community and a surprise to all.

Born in Belleville, the former Teresa Margaret Callahan, as Sister was known, entered the Providence Novitiate in 1921, and was professed in 1923. Down through the years Sister M. Damian spent mostly all of her religious life at the House of Providence, where she devoted herself to the care of the aged and infirm, and for several years was in charge of the printing press and Guardian Office.

In delicate health she came to the Marian Infirmary in 1955. Even then, Sister M. Damian who was always industrious did not want to remain idle and helped all she could with sewing although her eyesight was greatly impaired by the growth of cataracts on both eyes. One had been removed during the year and the second eye was endangered in the same way.

Physical ailments and mental worries over the years were a great source of suffering to our good little Sister, which we trust have merited for her a deserving reward in her eternal home.