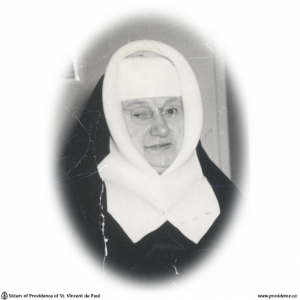 On January 15, 1979, in the chapel of the Immaculate Conception, Heathfield, His Grace Archbishop Wilhelm offered the Funeral Mass for Sister Mary Daniel. This date marked Sister’s eighty-fourth birthday.

Ellen Olive Baker, daughter of John Baker and Ellen O’Sullivan, was born in Bristol, England, and baptized at the Church of St. Nicholas in that city on February 4, 1895. When she was quite young her family came to Canada and took up residence at Lachine, P.Q.

In early adulthood Olive decided she was being called to religious life, but did not feel attracted to any community she knew in Montreal. Eventually, she heard of the Sisters of Providence, Kingston, from three of her maternal uncles, Fathers Daniel and Timothy, and Brother Michael O’Sullivan, all members of the Redemptorist Order, who came to know our Sisters at St. Vincent de Paul Hospital, Brockville. On the advice of her uncles, she wrote to Sister Mary of Seven Dolours and, receiving encouragement from her and a recommendation from Father Charles McCormick, C.Ss.R. of St. Mary’s Redemptorist College, Brockville, she requested and was granted admission to the novitiate. On February 1, 1919, she was received as a postulant and made profession as Sister Mary Daniel on January 8, 1921.

Throughout her long religious life, Sister Mary Daniel exemplified the charism of the Sisters of Providence of St. Vincent de Paul – “the gift of compassionate caring for the most  needy manifested in the humble, simple, loving service of those members of the Mystical Body of Christ.” At St. Mary’s of the Lake Orphanage, Kingston, and St. Mary’s Home, Edmonton, she devoted herself to the care of children deprived of home and parental love and guidance.

For some years at Providence Manor she, with Sister Phyllis Genore, operated the printing press, and here it was her chief delight to publish “The Guardian”, a children’s magazine, the proceeds of which helped in the maintenance of the children at St. Mary’s of the Lake.

The aged and infirm claimed her services at Providence Manor, Kingston, and at the Father Dowd Home, Montreal, where she spent eighteen years.

When a troublesome knee, which had been causing suffering for many years, made strenuous work no longer possible, Sister was happy to return in 1967 to Providence Manor, and for seven years she performed countless acts of kindness to the elderly residents – feeding the very helpless, visiting the lonely and in summer bringing those who were able in wheel chairs to the patio for air, sunlight and recreation.

In 1971 her own infirmities required nursing care and again she was happy to accept God’s will and retire to the Marian Infirmary at the Motherhouse. Although obliged to use a wheel-chair, Sister kept active, assisting at Mass daily in the Infirmary chapel and returning there later in the day to pray with companions the fifteen decades of the Rosary and make the Way of the Cross. In the recitation of the Rosary, the Sisters recalled all the intentions that had been recommended to their prayers. Once when Sister M. Daniel was announcing the intentions, to make sure that no one was forgotten, she offered one decade “for all those up on the wall” – the names on the bulletin board list. She attended community meetings and participated briefly and intelligently in the discussions.

Early in the New Year, 1979, she contracted pneumonia and was admitted to Hotel Dieu Hospital. On January 11, she was discharged, although feeling weak and tired. At 9.00 p.m. that evening, nurses observed that her breathing was labored and the doctor ordered that she be taken back to hospital. Sister Karen Bennett accompanied her in the ambulance and the staff in Emergency at Hotel Dieu gave her immediate and kind attention. But it was too late. In a very few minutes she suffered heart arrest and by 10:00 p.m. she had gone to God. The chaplain, Father B. McNally, being absent, Father Boniface, OPM, of St. John’s was summoned and anointed her. She had received the Sacrament of the Sick the previous week.

While her body rested at Heathfield on January 13 and 14, the Community in their morning and evening prayer recited the Office for the Dead around the casket.  Monsignor Walsh of St. Joseph’s assisted His Grace at the Libera and at the grave offered the prayers.

Sister is survived by a sister, Mrs. Irene Endersby of Williams Lake, B.C., and a brother Michael, neither of whom was able to attend the Funeral. Four first cousins (O’Sullivans) were present – Sister M. Timothy of Providence Manor, Mrs. Maude Gibbon of Montreal, Mrs. Theresa Le Mesurier and Mrs. Rita Dickinson, of Toronto.

Sister Mary Daniel’s influence on those she served was attested by a Mr. Campeau from the city who attended the Funeral. After the Mass he came to the Secretary’s office to get a Mass card. He told us that when he and his two brothers and two sisters were quite young, their mother died, and their grandparents, as not to separate the children, had them admitted to St. Mary’s Orphanage, Kingston, although they came from Montreal and could not speak English. It was consoling to hear this man tell of the happy memories he had of the Sisters at the Orphanage, among them Sister M. Daniel. He also told us that his brother, living in Montreal, had visited Sister regularly while she was stationed at the Dowd Home.