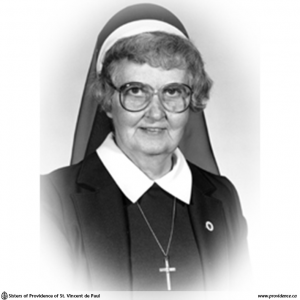 Clara Moran was born on a farm in an area called Wellfield about six miles from Chatham NB on June 11, 1914 to Mary (Dignam) and William Moran, the second eldest of six children. Her parents were both of Irish descent. Her father was very keen on educating the children. When the local school was destroyed by fire, he helped draw logs to rebuild it. Her mother was very gifted in using her hands especially with sewing.

Clara received her early education at the Wellfield School. She learned sewing from her mother. Clara loved music and when she was babysitting the younger children in the family she would sing to them before getting them to do their chores.

Before she completed high school, she went to Montreal to seek employment in domestic and factory work because jobs were scarce in New Brunswick during the depression.  She and her friend Catherine Power lived together and worked for the same company. Catherine entered the novitiate of the Sisters of Providence in Kingston in 1945.

Clara followed her the next year, 1946, to the novitiate and made profession in 1948. Sister being very skilled in sewing and cooking worked in the costume room and kitchen for about twenty years at the Motherhouse. She was then sent to St. Joseph’s Vocational School, Winnipeg, for four years where she ministered to the boys in her gentle manner as a ‘mother’ figure. This work she enjoyed very much. She was then reassigned to the Motherhouse for six years where she worked in the sewing room and later in the kitchen. She soon found the work in the new kitchen and cafeteria too much for herself and the staff. She then went to Rosary Hall, Edmonton, to take charge of the housekeeping much of which she did herself. She was an early riser so that she could do more work. She was very happy at rosary Hall and was well liked. When she returned to the Motherhouse, she worked in the laundry, sewing room and chapel. Sister was always willing to help out in any way she could.

She will be remembered for her prayerfulness, kindness, wit and gentle manner. When her memory began to fail, she eventually was confined to the infirmary where during her illness she endeared herself to the nursing staff.

Sister M. David was called home to her loving God at the Motherhouse on November 14, 2002. Sister M. David, who is predeceased by her father, William, her mother, Mary (Dignam), her sisters, Florence (Cook) and Margaret, is survived by her sisters, Bertha (McIntosh) and Lottie (Hay) and by her brother, David. She will be fondly remembered by her other relatives and friends, as well as by the members of her religious congregation.

The Mass of Christian Burial, held in the Chapel of Mary Mother of Compassion, Providence Motherhouse on November 18th, was presided over by Archbishop F.J. Spence accompanied by other members of the clergy. Msgr. T.J. Raby in his homily remarked how her hidden, humble service in the congregation was the support of the Sisters in the so-called front life of duty. Her ministry was a special presence of God that is gone.