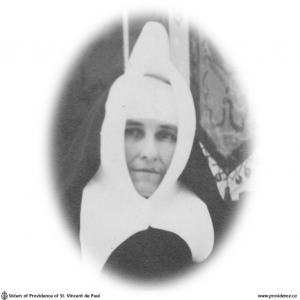 Mother Mary de Sales died at Providence Mother House, “Heathfield,” in the early morning of Thursday, Feast of St. Vincent de Paul, at about 11.25 a.m. – shortly after midnight. She had been ill scarcely three weeks.

Born in Oswego, N.Y., Isabella Daughan came to Canada with her parents when she was still a child and resided with them in Perth, Ontario. From her home here in 1906 she was admitted to the Novitiate in Kingston. Both her and her sister, Sister M. Paul entered the same day as postulants.

Her first appointment after profession in 1908 was to St. Francis G. Hospital, Smiths Falls, where she graduated as a registered nurse and spent some years there on the hospital staff. Following this she was successively local superior of St. Carthagh’s Convent, Tweed, Sacred Heart Convent, Arnprior, St. Michael’s Convent Belleville, and in 1931 she was appointed Mistress of Novices at the new “Heathfield” Novitiate.

In 1936 Mother M. de Sales was elected 2nd General Assistant at the Mother House, and in that capacity she served until her death, a valued member of the Community Council.

Mother M. de Sales was an exact observer of Rule, faithful and most edifying in her regular attendance at the Community Exercises. She was blessed with a kindly disposition and even manner, had a fine sense of humour and was a good listener – all of which endeared her to her associates. The Sisters found in her an understanding friend and as such, will miss her kindly welcome and motherly interest.

Her funeral was held from Heathfield, the first to take place here. His Grace Archbishop O’Sullivan sang the Mass and was assisted by the clergy from St. Mary’s Cathedral. The morning was beautiful and everything else in keeping. It was solemn but joyful for one more devoted religious had won her eternal crown.