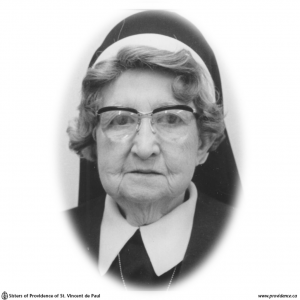 Elizabeth Marguerite Steward was born in Madoc, Ontario, on August19, 1894, one of seven children born to John Stafford Stewart and Mary Elizabeth Burns.

During the testimony of her life, the sisters and her relatives related that Sister Mary Demetria was a very devout and prayerful person; she cared for others, inspired confidence and gave generously of herself; sister, somehow, made you feel that everything was going to be alright; she was a woman of wisdom, compassion, understanding, dedicated service, and open to changes; and she had a great sense of humor and loved to dress up and play jokes on others.

She always kept in close touch with her relatives and for them she was a very special person. They looked forward to visiting with her and looked to her for advice when necessary.