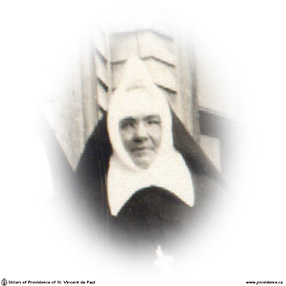 Sister Mary Denis died at the Marian Infirmary on November 25th, at the early hour of four a.m. It was the feast of St. Catherine – her name sake, and the beginning of her fiftieth in religious life.

Catherine Duffy was born in Glan, Killkelly, Co. Mayo, December 8, 1874, the daughter of James Duffy and Mary Grogan. Until 1906 she lived with her parents in Ireland, when she applied and obtained admission to the Sisters of Providence, Kingston. Sister and a few other postulants were recommended by Canon McDonell to his sister, Mother M. Scholastica, Superior General, who was then in quest of candidates for the Community. Being an only girl and the idol of a devoted mother from whom she had never before been separated, as well as the fact that she was a little above average age, it can be understood that she found it not easy to adjust herself to her new environment. But her strong faith and anxiety to persevere helped her to overcome whatever difficulties or discouragement that came her way.

In the years that followed her Novitiate, Sister was engaged in the various works of the Community and served at St. Mary’s of the Lake, Brockville, Daysland, and Edmonton, until about ten years ago when failing health caused her to become a patient in the infirmary. Sister gradually lost her memory and for a few years she was not capable of going to confession or Holy Communion. For one who had been so pious, bright and witty, her day it was sad to see and hear her talking without being able to form words or make herself understood. God’s ways are not ours, and in His wise Providence He deals with His friends in the way best suited for them to merit their eternal salvation. Sister had been anointed and had a lovely preparation for death, surrounded by every care and spiritual aid. Sisters were for days frequently in attendance by her bedside saying Rosary after Rosary, etc., and when she died on Friday morning some of the infirmary Sisters were with her as she passed peacefully to her reward.

His Grace Archbishop O’Sullivan offered Solemn Pontifical Mass in the Chapel of the Immaculate Conception, on the morning of the funeral, assisted by the clergy from St. Mary’s Cathedral, for the repose of her soul. In all there were ten priests, including two Monsignors present at the Mass.

The remains were taken for burial to St. Mary’s cemetery. Our Reverend chaplain recited the prayers at the grove. One brother and a niece live in Calgary, but were unable to come for the funeral.