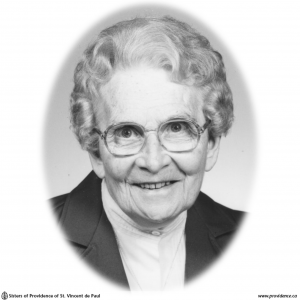 Her parents, the descendants of emigrant farmers from Northern Ireland, settled in Lanark Township, a farming community outside of Perth, Ontario. They instilled in Elizabeth (Sister M. Denise), and her fiver younger siblings, a great appreciation for her faith, as well as a strong sense of responsibility. Being brought up in a country setting greatly influenced the reverential way Elizabeth looked at the world and all of creation. All of the children were responsible for helping to maintain the garden and milk the cows. They produced such crops as turnips, potatoes and corn. During the summer months berries were also picked as they came into season. In helping to yield the harvest, Elizabeth was responsible for contributing to the success of her family and she learned the value of hard work and determination at a very young age. It was while on the farm that she learned several important values that would later help her in her religious commitment.

Elizabeth’s parents also placed great emphasis upon the necessity of obtaining a good education and of earning a living for oneself. Elizabeth admired and respected her parents very much and their strong personalities had a substantial influence on the decisions she made in her adolescence and throughout her life. While attending high school, Elizabeth began working for a local dressmaker. She soon excelled in the dressmaking business and enjoyed it so much that she had aspirations of becoming a dress designer one day. Her mother, however, convinced her eldest daughter to become a teacher instead. Elizabeth’s first teaching position took her to Saskatchewan for three years.

Upon returning to Ontario, Elizabeth received a teaching job outside of Perth. Here, she became friends with the Sisters of Providence. Although Elizabeth enjoyed men’s company and even was engaged to be married twice, she could not go through with the wedding plans because she knew in her heart that her life would only be fulfilled if she dedicated her life to God completely. In 1932, at the age of twenty-six, Elizabeth entered the congregation of the Sisters of Providence of St. Vincent de Paul in Kingston, where she later took the name of Sister Mary Denise.

Sister taught for seven years in Batawa, and later in Gananoque, Kingston, Belleville and Trenton. Vatican II came when Sister Denise was in her sixties but she adapted to the changes remarkably well for she felt she was the same person whether she wore a habit or not. She retired from teaching in 1971 and the following year she went to Edmonton, Alberta to set up a pastoral care unit for people with chronic illness.

In 1973 she returned to the Motherhouse and set up a resource library. Never one to withdraw from a challenge, Sister dedicated herself to this daunting endeavor for sixteen years. After this task, Sister went to live in Belleville for two years in a home for separated and divorced women, before sudden illness caused her to return to Kingston. In spite of filing health, Sister regularly visited the patients at Providence Manor until she was forced by her frailties to retire to the infirmary at the Motherhouse.

Sister is pre-deceased by her parents, John and Elizabeth (McDonnell), by her brothers, Charles, John and James, as well as by her sister, Carmel (Brady). She is survived by her sister Kathryn (Cass) of Lanark, and by several nieces and nephews. Sister will long be remembered by her former pupils, some of whom attended her wake and funeral liturgies. Sister will also be fondly remembered by her Sisters in religion.

Months before her death, Sister M. Denise picked out her favorite readings from scripture and the hymns she wanted used at the funeral liturgy. It was indeed providential that she chose the very gospel which was assigned for the day of her funeral. Luke 2:22-32 spoke of her, in the sense that she was now leaving the world to enter into the heavenly kingdom. In so many ways Sister saw the face of Christ in others just as Simeon and Anna did. “Now Lord, you may dismiss your servant in peace.”

The Mass of Christian Burial was celebrated on Tuesday, December 29, 1998 by Archbishop F.J. Spence assisted by several other members of the local clergy. The homily was preached by her friend and Spiritual Director, Father David Hale. Father remarked upon Sister’s deep sense of gratitude for all of creation, her virtues, especially her strong sense of fidelity and her compassionate presence to others. Father invited those present to give thanks for Sister’s long life, during which she touched all who knew her in a unique way.