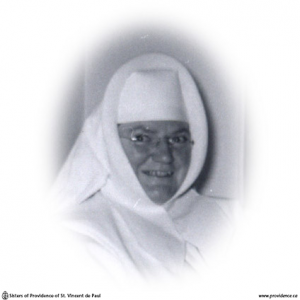 On February 17, 1909, in St. Peter’s Church, Parry Sound, Ontario, Joseph Emedie Cote took Ellen (Nellie) Mary Foley to be his wife. Of this most loving union, in the space of five years, three children were born. The first offspring, Marie, was to be her father’s darling and close companion; the second, Joseph, was his namesake, and the third, John, was to cost him his wife – she died the day after her last child was born.

Even before their marriage Nellie had been in poor health and had told her beloved Joe that he should marry again if anything happened to her. With small ones in need of a mother’s care, Joseph took her advice and chose for his second partner Annie Sweet, of Trenton. The family resided in that Southern Ontario town from 1916 on.

Her father taught Marie the absolute importance of giving God first place and so it was not surprising that in her childhood days she expressed the wish to become a nun. However, she delayed making a decision to enter the convent until after she had completed her nurse’s training at Henry Ford Hospital in Michigan and had worked for a year in Detroit. Among her ‘treasures’ Marie kept many beautiful family letters including one in which her father discussed wisely and gently the pros and cons of the choice she was about to make.

Having considered her father’s advice and feeling ‘a desire to consecrate (herself) to God’, Marie presented herself for admission to the Sisters of Providence on August 15, 1932. The Sisters who had taught Marie at St. Peter’s, in Trenton, were happy to recommend her as a postulant.

Marie became known as Sister Mary Desmond when she pronounced her first vows in 1934.  She went then to nurse at St. Vincent’s Hospital, Brockville, and from there to St. Francis’ Hospital, Smiths Falls, and St. Mary’s of the Lake, Kingston. In 1940 she was appointed operating room supervisor at Providence Hospital, Moose Jaw. This responsible position she had to fill both day and night as no qualified relief nurse was available. Except for one more year in Brockville, Sister did not reside in Ontario again until illness forced her to take time off from her duties in 1983. As with many of our Sisters, she came to be a “westerner at heart”.

In 1956 Sister Mary Desmond moved from Moose Jaw to Daysland and it was there that she added a new and much wider scope to her apostolic endeavors. The chance reading of an article in the Scarborough Foreign Missions magazine touched her generous, faith-filled heart and made her a missionary – although like Therese of Lisieux, she was never to see the missions. From then until her death, much of her spare time went into money-making projects, voluminous correspondence, careful bookkeeping, laborious packing and shipping of supplies, neatly trimming boxes of used stamps, and constantly encouraging others to join in her plans. Over the years she multiplied friends at home and in foreign counties, distributed almost $25,000 and directly assisted the sick with many drums of medical goods. The account attached tells in her own words how effective her efforts were. The many letters received in her lifetime and after her death are evidence of how much her help was appreciated.

One of her dear friends and associates was Sister Mary Anna Kelly, and we are indebted to Sister for her several contributions to this necrology.

Sister Mary Desmond’s hands were never idle, and they were skilled hands. She loved to tat, knit and crochet. Many of the fine cutwork pieces she did graced the chapels where she lived. Some of the articles she crafted were sold ‘for the missions’. One tatted tablecloth brought $1,000 to help in the purchase of a garbage truck for our mission in Lima, Peru.

While at Daysland, in the years 1959-63, Sister Mary Desmond took by correspondence the course for Medical Record Librarians. By 1965 she was president of the Medical Record Association of Alberta. After a four-year term in that office, she served as chairperson for several committees of the organization, taught first aid classes and assisted in disaster planning.

In this willingness so shoulder responsibility, Sister Mary Desmond took after her father who was a Deputy Grand Knight and founder of an association for railway men. He worked on Canadian railroads for forty-one years.

She ‘inherited’ from her father, also, a willingness to communicate and a facility in doing so. In recommending her for an honorary membership in MRAA, the librarians signing the recommendation cite her “ability to work harmoniously with allied organizations and promote a spirit of friendship” both within and outside the group. When she was posted to St. Joseph’s Hospital, Edmonton, in 1966 to work in Medical Records and Admitting, she founded the hospital newsletter, “Spotlight” and she continued as its editor for 17 years. Some of her correspondence was by hand, but Sister also typed and taped the news to family, friends, classmates, missionaries and Sisters. Her letters were a joy to those who received them and, as occasion offered, she would engage in an exchange of spiritual advice.

The life of the spirit was Sister Mary Desmond’s fundamental concern and her faith was the solid type that provided the strength she needed for the apostolate, kept her joyful and smiling despite the stress of poor health in her later years, and enabled her to challenge those who had fallen away. She had great devotion to the Blessed Virgin Mary and her Rosary, to Mass and to the Blessed Sacrament. She spent a Holy Hour every day.  Like many other Sisters, in her simplicity she found the changes in Religious life since Vatican II very difficult and she preferred to quietly carry on her traditional beliefs, blending in unobtrusively. Devoted to the Rule, she impressed everyone as being happy and dedicated with a zeal that was catching.

Sister Mary Desmond was a diabetic. In 1977 she was experiencing eye trouble as a result of this affliction. In 1983 she suffered dizzy spells from inner ear problems. The combination of these conditions may have led to the fall in July of 1983 which resulted in a broken hip. In any case, by October, 1983, it was necessary for her to come to the Motherhouse Infirmary for a period of recuperation. As it turned out she was to end her days in Kingston.

An infected foot, which refused to heal, kept Sister in the Hotel Dieu Hospital most of the spring of 1984. Surgery was performed on the foot and there was a danger that amputation might be necessary. In the summer of that same year Sister spent eight days in the Intensive Care Unit of the hospital, having suffered a heart attack. In November she was re-admitted “for tests”, and on November 29, a nurse, making her rounds, discovered that Sister had died in her sleep.

Her sudden death was a great shock to all, for until the very end she had kept up her accustomed ways. In the hospital room next to Sister Mary Desmond was a prisoner from Collin’s Bay Penitentiary – a double amputee by the name of Tom Farris. Sister made a point of getting to know this stranger who seemed so much worse off that herself, and soon they were tapping messages back and forth on the wall that separated their rooms Tom came in a wheelchair to Sister’s funeral, accompanied by Deacon Al Meloche, a chaplain at Collin’s Bay. They shared the bus for the handicapped with Sr. M. James. Tom has now returned to the Sacraments and the practice of his faith and is getting around on artificial legs.

Among the tributes posthumously received were the following: in memory of Sister Mary Desmond, Mrs. Pearl Porter donated a $20,700 mini bus/van large enough for five wheelchairs to St. Joseph’s Hospital, Edmonton; the medical staff of that hospital observed a period of silence in Sister’s honor; donations were made to the Student Scholarship Fund of the Henry Ford Hospital School of Nursing by the Alumni Association and Sister’s classmates; the Alberta Health Records Association, which she helped to found, made her an honorary member saying, “She epitomized our motto, ‘Those who help go forward’.”

Since Sister Mary Desmond’s mother died when Sister was only four years old, she had a natural curiosity to know more about her. In a letter to his daughter, dated July, 1931, Joseph Cote answers her request for information. He concludes his glowing description with these words, “I can sum up all her life and her actions and I can truthfully say I never knew of her to sin against God or her neighbours.” You, Marie are a ‘duplicate’ of her.” While we may see in this the exaggeration of a loving heart, we cannot dispute that any faults Marie had were well covered over by her charity. She used every moment well. The closing stanzas of one of her favourite poems ask us to carry on a she did, that we may enjoy her reward with her:

There is work still waiting for you,
So you must not idly stand;
Do it now, while life remaineth –
You shall rest in Jesus’ land.

When that work is all completed,
He will gently call you Home;
Oh, the rapture of that meeting,
Oh, the joy to see you come!