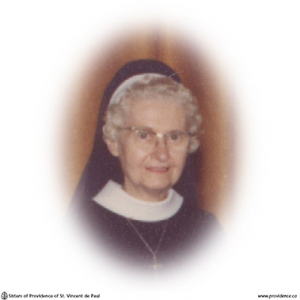 On January 13, 1902, to Lambeth West, England, Eileen King was born – the second child of Herbert King and Julia Nano Weldon. Her brother, Gerald was the first born, and after Eileen, in quick succession, there followed three more sisters and three brothers. The Protestant father insisted that the children practice vigorously the faith of their Irish Catholic mother, and so they did. Throughout her life Eileen showed the devotion and discipline developed in those early years.

When Eileen was about 22 years of age, her aunt wrote from far off British Columbia to encourage her niece to come ‘overseas’ as she had found in Canada a suitable marriage partner for her. Eileen came, but plans did not work out and, instead of marrying, she went to live with her aunt in Vancouver. Sometime within the next two years she moved to Edmonton, where she stayed at Rosary Hall while working as a domestic.

The young Englishwoman was attracted by the Sisters at Rosary Hall, but the idea of entering apparently crystallized for her when a friend, who was looking after children in a private home, quit her job to enter a religious community, leaving Eileen to take over for her.

Eileen first wrote to inquire about entering in 1926. In her letter to Mother Mary Ursula she says that “for a long time, in the busy turmoil of the world, (she) felt that God was calling”; but, her application was not accepted until she wrote again in 1928. On September 21st of that year she came to Kingston accompanied by a second aspirant, Caroline Josephine Kramps, our present Sister Mary Vincent.

After making final profession in 1933, Sister Mary Dolores, as she was now called, continued the same work she had had as a junior professed, that of caring for the youngest children, first at St. Mary’s of the Lake Orphanage and then at Providence Shelter and St. Joseph’s Vocational School in Winnipeg.

In 1945 she came to Glen Nevis, where she endeared herself to the young ladies under her charge, one, at least, of whom kept up correspondence with her until shortly before Sister’s death.

After a brief return to Winnipeg, Sister Mary Dolores had some practical nursing experience at St. Joseph’s Hospital, Edmonton, and then faced a demanding challenge when she was named as one of the ‘pioneers’ to Athabasca. In this northern Alberta mission the Sisters had no running water and bitter cold winter weather to endure. During the school year they kept Rosary Academy as a hostel for high school age girls and in the summer months they taught catechism to children preparing for First Holy Communion.

From 1950 to 1957 Sister furthered her knowledge of practical nursing while stationed in Vancouver and Edmonton. In the same period she took courses in X-ray and laboratory technology and had some experience working in the lab in St. Mary’s Hospital, Camrose. This new training was then put to use in Daysland where for the next nine years Sister worked in the x-ray and laboratory departments of Providence Hospital.

At each posting her excellence as a religious was recognized. While in Daysland she was assigned to teach the vows and catechism to the junior professed at the hospital.

Throughout her life Sister Mary Dolores was known as a gentle, kind woman, a good worker, dependable, cheerful, sincere and devout, a perfectionist, but in a way that won admiration. She combined high principles with the courage of her convictions in the face of opposition and criticism. She often was heard to say that it was not work alone that made a good religious. It was no surprise, therefore, when she was appointed Superior of Rosary Hall, Toronto, in 1967 and St. Joseph’s, Winnipeg, in 1971.

However, in these years her health had begun to fail. She experienced one stroke, to be followed soon by others. Therefore, in 1972, she came to live at the Motherhouse, taking up part time duties as receptionist. Much of her spare time she spent visiting the sick Sisters in the infirmary. When a ride was available, she liked to visit shut-in around the city. It was always her habit to put others first and to do all she could fore less fortunate.

During the last few years of her life Sister Mary Dolores suffered from Parkinson’s disease. The degree of her disability increased with each passing year until she was no longer able to move about her own or to communicate except with great difficulty. She endured dreadful choking spells and bouts of pneumonia which caused her to be hospitalized more than once. On April 20, 1984, at 7:00 a.m. from her Hotel Dieu Hospital room she passed into the vision of Him whom she had served so well. It was Good Friday. As His Grace, Archbishop F.J. Spence, said in his funeral homily on Easter Monday, while we were celebrating the Pascal Mystery in these days, Sister Mary Dolores had been living it to the full. It was fitting that she, who chose Our Mother of Sorrows as her name sake, should die while we were commemorating that Passion on which Mary shared with her son, Jesus.

Two of Sister’s brothers had moved to Canada in the years after she came herself and so her brother Leo and his wife, Dorothy, were able to come from London, Ontario, to be present at her funeral. The other brother, Gerald, living in Calgary, Alberta, was not well enough to attend. The only other surviving member of Sister’s immediate family is a sister, Ellaline, who lives in Sussex, England.

Sister Mary Dolores had been an almost daily communicant before she entered. The notes and prayers that she left behind contain ample evidence of the strong prayer life that sustained her in her apostolic duties, her heavy responsibilities and her years of suffering. Many of her prayers were offered for Rev. Jean Paul Tanguay, OMI, a missionary in the Yukon since 1944, and for her family separated from her by many miles. Her recitation of the following prayer was indeed answered, for over the years she developed a beautiful, intimate relationship with God, our Lady and Saint Joseph:

O Lord, I know not what to ask of Thee; Thou alone knowest what my true needs are. Thou loves me more than I know how to love myself. Help me to see my real needs which are concealed from me.

I dare not ask either a cross or consolation. I can only wait on Thee. My heart is open to Thee. Visit and help me for Thy great mercy’s sake; Strike me and heal me, case me down and raise me up. I worship in silence Thy Holy will and Thy Holy will and Thine inscrutable ways.

I offer myself as a sacrifice to Thee. I put all my trust in Thee. I have no other desire than to fulfill Thy will.