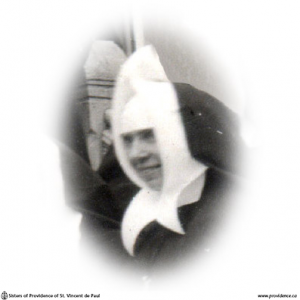 After her profession Sister was sent to St. Vincent de Paul Hospital, Brockville, to take up the study of nursing. Gifted with admirable qualities of mind and heart, she was successful in her work among the sick.

She was later appointed Superior of St. Mark’s Convent, Prescott, but a demand for nursing Sisters for Providence Hospital, Moose Jaw, Sask., necessitated her return to nursing.

Having spent some years in the West she was recalled and placed in charge of St. Michael’s Convent, Belleville. Later she was appointed Superior of St. Peter’s Convent, Trenton. Here her health began to fail, and she returned to Kingston, no longer able for any responsibility.

Although Sister’s failing health prevented her from active duty during the last three years, she never lost courage but maintained a cheerful outlook to the end.