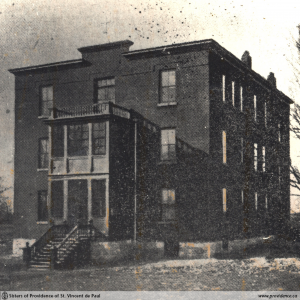 Sister Mary Dominic, an invalid for the past eight years, died at the House of Providence early Saturday morning, October 15th, which was the fifty-ninth anniversary of her Reception of the Holy Habit.

Anna Murray was born in Marmora, Ontario, the daughter of Mr. John Murray and Mary O’Brien. She entered the House of Providence Novitiate, March 19, 1896, and made profession in 1898. Sister M. Dominic was then sent to Brockville to take her training as a nurse, and then she graduated at St. Vincent de Paul Hospital School of Nursing, she was appointed to the staff of St. Francis Hospital, Smiths Falls. Sister remained in Smiths Falls until 1932 when failing health obliged her to give up the arduous duties of a hospital. She then returned to Kingston and continued her charitable ministrations among the sick and aged residents at the House of Providence until 1947. For the past 8 years she was a patient there in the infirmary.

As a nurse Sister was capable, efficient, and kind to the sick. Prolonged illness and inactivity proved a great strain, making her nervous and exacting without being aware of it; yet, she kept alert, keen and prayerful to the end. All through her illness, she had a faithful kind nurse in Sister M. Anastasia who saw that her patient’s wants were taken care of night and day.

Three sisters survive and one brother, Dr. Murray of Ottawa. Another sister, Mother Mary Philip, a member of the General Council and one time Mistress of Novices, died in 1915.

Solemn Mass was offered on Oct. 17th, in Our Mother of Sorrows Chapel, House of Providence, by Rev. W.A. McGee, a nephew of the deceased Sister, assisted by Fathers Ainslie and Jelinek.  Present in the sanctuary were Msgr. Byrne, Msgr. Sullivan, Fathers Lamarche, Walsh, Hendricks, Murphy. The prayers at the grave were recited by Father McGee.