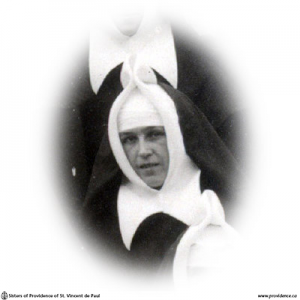 Sister Mary Dominica (Catherine Johnson) was born at Dingle, County Kerry, Eire, on March 31, 1887; her parents were James Johnson and Mary Aherne. She was baptized in the parish church at Ferriter, Diocese of Kerry.

When quite a young woman she came to Holyoke, Massachusetts. And met the Sisters of Providence of that diocese, a community which had been founded by the Sisters of Providence, Kingston. In January 1910 at the age of twenty-two she entered the novitiate at Kingston and made profession in 1912. With the exception of one year at St. Vincent de Paul Hospital, Brockville and four years at Providence Hospital, Daysland, her religious life was spent at Kingston, Providence Manor, St. Mary’s of the Lake and the Mother House, “Heathfield”.

As her talents were artistic, she was employed for some time in the printing office at Providence Manor and did fine work in book binding, a skill she learned from the Providence Sisters of Montreal. But her constitution was never robust and her health became seriously impaired in early middle life, so that during the last years of her active life she could perform only light duties in the sewing room.

For many years a victim of diabetes, in October 1970 she became acutely ill and was admitted to Hotel Dieu. After a month in that hospital it was evident that she would require hospital care for the remainder of her life and she was transferred to St. Mary’s of the Lake.

She was able to attend daily Mass in a wheel chair until a couple of weeks before her death, and was mentally alert and pleased to see visitors from the Mother House or the missions. So it came as a surprise on May 2nd to receive a call from St. Mary’s that she seemed to be in danger of death. Sister Grace Maguire, assistant, and Sister Mary Electa went to the hospital, but found that she had rallied. Her condition remained satisfactory for a few days and she was able to receive Holy Communion on the First Friday, May 4th. On Sunday, however, May 6th, a message came that she was again quite low, and when Our Mother General and Sister Mary Electa went out they found her unconscious. She died quietly that evening about 9 p.m.

His Grace offered the funeral Mass with Monsignor Bernard Walsh of St. Joseph’s parish, and Fathers Buckley, Pickett, Clement and Rozon present in the sanctuary. Father Pickett, chaplain of St. Mary’s Hospital who had attended Sister on her death bed, accompanied Father Buckley, chaplain at Heathfield, to the cemetery and joined him in the prayers at the grave.

Sister is survived by one brother Thomas Johnson of Chicago, who flew to Kingston for the funeral and one brother James and several nieces in Eire.