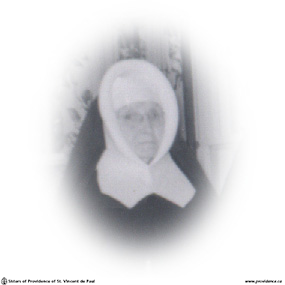 On February 28, 1959, the Community suffered the loss of a member of the General Council, Rev. Mother Mary Dorothea. Though she had reached the advanced age of 84, Mother Dorothea had been on duty until September 1958 and remained mentally alert until three weeks before her death.

Ann Dorothea Griswold was a delayed vocation. Born in St. Andrew’s near Cornwall, Ont., she was the only child of her family who survived infancy, and she lost her father before she was old enough to remember him. Her mother when left a widow moved to Cornwall where Anne received her elementary and secondary education. After graduation she attended Ottawa Teachers’ College and then taught first in the elementary schools in the district of Cornwall and later in Saint Joseph’s School, Ottawa, all the while being the companion and consolation of her rather frail mother. During these years she had the opportunity to come in contact with the master minds by extensive reading and by hearing the noted lecturers who came to the capital city.

Her mother’s death in 1917 left her free to follow her vocation and in August of that year she entered the novitiate at the House of Providence. Her keen mature mind and almost encyclopedic knowledge enabled her to derive the fullest benefit from her religious training, and she was well qualified when she made profession in 1919 to resume her apostolate of teaching.

After two years in St. Mary’s School, Kingston, she was sent to Gananoque to be the first principal of the newly-established St. John’s Separate School. For ten years here she proved herself an efficient leader and an excellent Grade VIII teacher. She served another term as principal in St. Mark’s School, Prescott and then taught different grades in Belleville, Tweed and Trenton.

In 1946 she was appointed first Superior of Sacred Heart Convent, Batawa, a mission undertaken in the interests of a Czech colony which had been brought to Canada by the Bata Shoe Company.

In 1948 she was elected to the General Council with Reverend Mother Victoria as Superior General, and except for a year when she was recuperating from a heart attack she remained until her death a member of the Administration.

During her last ten years she put to good account the talents of a mind which was as keen and alert as in her prime. Under the direction of Reverend J. Elliot MacGuigan, S.J., Canonist, Jesuit Seminary, Toronto, she was the leader of a committee to revise the Rules and Constitutions before they would be submitted to the Sacred Congregation of Religious for approval. So expert was her work on this assignment that Father MacGuigan called her the Canon Lawyer, and it was due principally to her efforts that in 1953 the Rules and Constitutions were approved by Rome without a single change having to be made.

A second service she rendered the Community during these years was her work as librarian. Not only did she plead constantly with the Superiors and bursar for the purchase of the best books and more and more book-shelves; she re-catalogued the whole library, a Herculean task; she was at the beck and call of any Sister who wished to get a book, but woe-betide anyone who lost track of a borrowed book; and she kept the Sisters in the Infirmary supplied with reading material.

Along with her duties as librarian she found time to act as a portress for two hours daily.

Several times during her last two years she suffered heart attacks, but each time after a short rest returned to her duties. In September 1958, a stroke deprived her of the full use of her right side, and she was sent to the Infirmary never this time to leave it. Though her speech was slightly impaired, it was only for three weeks that her mental faculties were dimmed and even these seemed to clear as her end drew near.

On Friday evening, February 27th she knew the Sisters and spoke coherently. The chaplain, Father Downey, anointed her. On Saturday morning we knew her agony was approaching and recited the prayers; she was conscious, for we saw her lips moving and she struck her breast at the Agnes Dei and raised her head to make the sign of the cross. Just before the Angelus rang at noon, she turned her head on the pillow and looked for a second with rapt attention; then her head fell back and she was gone. It was Saturday, and Mother Dorothea had had a strong devotion to the Scapular and the Rosary. Did Our Blessed Lady come for her? We hope so.

Mother Dorothea had a long, full and fruitful life. Scores of pupils remember her with affection and admiration; relentless as she was in demanding from them attention to duty, she could pass over with a knowing look or a few words in private a youthful prank in which there was no malice. But it was her Sisters in religion who held her in the highest veneration. All would go to her with problems knowing that her common sense, her strong unsentimental piety (which was what that word really means-a sense of duty to God, to the Community and to fellowmen) and her never-failing sense of humour would untie most Gordian knots. She had no undue human respect-she never feared to point out where her listener was at fault; but beneath an exterior that appeared very matter-of-fact and often severe, all knew that there was a heart, understanding, warm and sympathetic toward the troubled and suffering. While we pray for her, we hope that she has already received her eternal reward and is continuing her work for the Community and for souls.