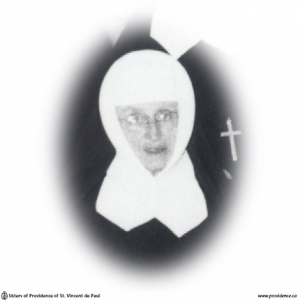 Born in Chesterville, Sister was the daughter of Patrick Coyne and Norah Kain, pioneer residents of that locality. In 1906 she entered the Providence Novitiate, and made profession in 1908. She spent several years in the West – at Providence Hospital, Daysland; Providence Hospital, Moose Jaw; and as local Superior at St. Joseph’s Vocational School, Winnipeg, and St. Mary’s, Edmonton. For a few years she was Assistant at the House of Providence.

Most of Sister M. Dorothy’s religious life, however, was devoted to the interests of St. Mary’s of the Lake. She was one of the four professed Sisters who, in 1910 with eleven novices and thirteen postulants took over the building as Novitiate and orphanage. Here in the early days she gained much experience and increased regard for the beautiful locality at the Lake during her many years in charge of the management and care for the children especially in the boys dept.

In 1947, a year after St. Mary’s was opened as a hospital, she was appointed Assistant Superior, a position she occupied until her death. Sister was intensely interested in the Marian Year addition to the hospital, and though in failing health for many months, she continued, sometimes even from a wheel chair, to direct the landscaping of the grounds.

She came to the Mother House here at Heathfield for the retreat August 6-15th, though she was obliged to follow the exercises from the infirmary as she was unable to move around or go to the Chapel. On the Feast of the Assumption she wanted to return to the Lake, but was persuaded to go to the Hotel Dieu for a check; three days later Sister died, a few hours after receiving the Last Sacraments.

On Tuesday morning, August 20th, Solemn Requiem Mass was offered for the repose of her soul in the Chapel of the Mother House here by Rev. R.J. Flurey, chaplain, assisted by the Cathedral clergy. Of her immediate family none survive. The last of the family, a brother died a few years ago. Two nieces, the Misses Annie and Catherine Coyne of Montreal, attended the funeral.