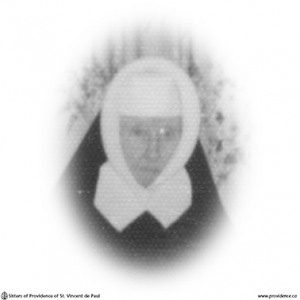 William John Sainsbury-Woods, a Hampshire man, and Elizabeth Barnes, a Dorset girl, met in college in Winchester England. After their graduation they decided to pool their educational resources and start teaching school, he as principal or master, and she as assistant master in the same school. Their marriage was blessed with twelve children – eight boys and four girls. The last little one, Margaret Mary, was to outlive all her family and die at the grand age of 92, a venerable member of the St. Sisters of Providence of St. Vincent de Paul, known to them as Sister Mary Dunstan.

In an effort to improve their income, the parents moved the family home several times as the children were growing up, each time taking a bigger school, and the father added to his education, eventually obtaining a Master’s degree at Oxford. He learned to read and speak Greek, Latin and French with as easy fluency as he did English and was an excellent musician. This latter talent, he put to use to bring in a little more money by acting as church organist. The mother was an enterprising woman who worked ceaselessly, doing without things in order to provide for her children.

Margaret Mary was born on October 15, 1892, in Airmyn, Goole, Yorkshire. He father had died suddenly just six weeks before her birth. As soon as possible after the birth her mother took up again her work of teaching in order to keep the family together. She was able to secure the school, which had been her husband’s, and, though it was a struggle, this tiny but brave woman raised all the children herself. She apprenticed the two oldest boys to a firm of painters and decorators, as they had some talent in art, and hired an illiterate girl to look after the younger ones in return for bed, board and tutoring. At times the family was desperately poor.

Margaret Mary, or Marjorie as she was called, complete her elementary school education and then went to work. In May 1910, she was able to take a trip to Ireland. There she met Elizabeth O’Kane (nee McLuskie) a woman some twenty years older than herself. Elizabeth was expecting her first child and had just lost her husband when the ship of which he was captain went down at sea. They became friends and during World War I Marjorie lived with Elizabeth and her child in London, England. Marjorie worked in a nearby hotel and after hours stayed with Ernest – the child – while his mother was at work. Through the O’Kane’s, Marjorie Woods became interested in the Catholic faith (likely she had been raised as an Anglican). On October 1, 1920, she was conditionally baptized at St. Dominic’s Priory Church in London. On the 17th of the same month she was confirmed in Westminster Cathedral with Elizabeth O’Kane as her sponsor.

By this time, three of Marjorie’s brothers had immigrated to Canada. One of these boys, Walter, was eventually to rise to a high position in the Canadian civil service. He has written the story of his life in a book entitles, “The Men Who Came Back”, and some of the information in this necrology is taken from that publication.

It is not known exactly why Marjorie decided to immigrate to Canada, too. She may have been influenced by her brothers or by Elizabeth O’Kane. At any rate both women came here about the same time. Elizabeth was hired as a domestic for Judge McGillvray of Whitby, Ontario. Marjorie arrived on November 23, 1920, but it is not clear to which city she went.

By the fall of 1922, she had taken up residence in Montreal, in St. Leon’s Parish, Westmount, and was listing in her qualifications for employment “some training in cooking”.

When Elizabeth and Ernest O’Kane moved to Toronto as little later, they were the first O’Kane’s in that city’s phone book, but there had been O’Kane’s in Montreal for many years. In a letter of Mother M. Edward McKinley’s, dated May 30, 1895, she mentions a Miss Margaret O’Kane of 21 Catanege Rd., Montreal. At this time the Community was considering establishing Tertiaries and Margaret O’Kane was proposed as a fine young woman who might be interested. There is no record of her having become a member. She would have been close in age to Elizabeth and could have been a relative of her husband. If Catanege is a corruption of Cote des Neiges, the address of Marjorie Woods and Margaret O’Kane could have put them in the same parish. Given all these suppositions, Marjorie Woods may have heard about the Sisters of Charity of the House of Providence through Margaret O’Kane.

Another possibility is that Marjorie Woods came to know young Betty Mattimoe (who became Sister Mary Faustina, SP) who lived in Whitby and went to Normal School in Toronto during the years when Elizabeth O’Kane was in that area.

In any event, by April of 1923 Marjorie had decided to inquire about entering religious life. In her letter she acknowledges her “complete unworthiness of such a high calling”, but places “full confidence in God that, should (her) miserable offer be accepted”, He would grant her the necessary graces. Her offer was accepted and on May 10, 1923, she came to the novitiate of the Sisters of Providence at Kingston.

Sr. M. Dunstan’s life in religion covered a span of 62 years. During that time she lived on several of the missions both East and West. Everywhere she was most faithful in carrying out the duties assigned to her – most of these were in the domestic line. Many a fine meal she prepared! She is remembered by the Sisters also for her fidelity and sincerity at prayer, both those said in common and in her private devotions. Her last active tour of duty was at Brockville, Ontario, where for 15 years she was in charge of the laundry at St. Vincent de Paul Hospital. She retired to the Motherhouse in Kingston in 1968. In 1974 she became a Canadian citizen.

A very intelligent person and an avid reader, Sr. M. Dunstan could turn every phrase into a witty remark. She was fond of referring to “Bobby and Lizzie Browning” as intimate acquaintances – as indeed they were in the sense that she knew their works so well. At the time she was applying for her old age pension she wrote to Sr. M. Scholastica, then Secretary General, “I am sending you my life’s record. I hope this won’t be lost, as the village I was born in was in the flood area and is probably no more.  When you get the “pension” for me I hope you will send it right along and I have one good time on it. You could bring it; we would enjoy it together.” Sister was musical, too, and could play a merry tune on the harmonica to add to the fun at recreation times. Her love of learning and her talent in music were, no doubt, encouraged by her father; her sharp wit she shared with her mother.

In her advanced years, Sr. M. Dunstan’s sense of humour endeared her to the Motherhouse Chaplain at the time, Fr. Dan Ryan, and his attentive ministry to her was rewarding for both. Their faces lit up when they were parrying with one another.

This holy woman of scripture stood by her in the person of another! Ernest O’Kane, too, was a faithful visitor of his “Aunt Marjorie”, although it pained him to see her mental facilities declining with the advance of age. He still treasures her words to him when he was a child: “Stand up tall. Don’t let anybody stand taller than you. There is not man in this world you need to look up to.” Sr. M. Dunstan was diminutive herself and coming from a poor family had learned early in life believe in the value of her own person. This she taught to Ernest, too.

On February 20, 1985, at 4:45 p.m. Sr. M. Dunstan slipped off rather quickly to her heavenly reward. She had suffered from arteriosclerosis and heart trouble for many years.

The funeral Mass on February 23, at Providence Motherhouse, was concelebrated by Fr. T.J. Raby, Vicar General, Fr. J.J. O’Neill, Fr. D. Clement, Fr. P. McAvoy and Dr. Dan Ryan. In his homily Fr. Raby referred to the blessing given to us in the long life of Sr. M. Dunstan. Her works were of “the kind most pleasing to God, humble works of service that did not bring public acclaim, but the everyday works on which others, persons and institutions depend.”

May He Who Himself chose humble works during His life with us reward her fully for her important contribution to His Church and our Community.   May her belief in the worth of each person spread among us.