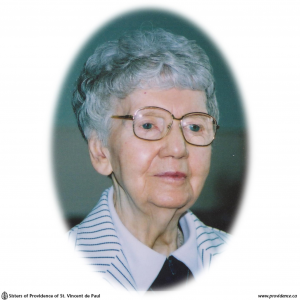 Agnes Isabella McCulloch was born in Whitewater, Manitoba, on October 14, 1908. She was the 6th of 8 children born to Edgar McCulloch and Alice Aindow. Her parents had emigrated from England around 1902. There was no school in Whitewater so she did not attend school until the family moved in 1916 to where the children could attend a public school. Her mother was anxious that she attend a Catholic school so Agnes was sent to a Catholic boarding school for 6 years. Then her mother died and the family remained on the farm for two more years. When her father sold the farm, Agnes, at age 18, was on her own. She did some domestic work and completed her high school. She then went to Winnipeg where she first met the Sisters of Providence while she was working at the Archbishop’s residence. Agnes trained as a nurse and graduated from St. Joseph’s School of Nursing in Winnipeg in 1932. She entered the Novitiate of the Sisters of Providence of St. Vincent de Paul in February 1933. Sister ministered in nursing at St. Joseph’s Hospital, Edmonton and Providence Hospital, Moose Jaw, for most of her religious life. At Providence Hospital Sister not only carried out her duties as Head Nurse of the medical floor, but did it with a pastoral concern for all the patients and her staff. After she retired from nursing in 1973, she took a course in pastoral care at St. Paul’s University, Ottawa. She returned to Moose Jaw to minister as a pastoral visitor at Providence Hospital from 1974 to 1981. In 1981 she became part of the newly formed Pastoral Care Department. She ministered in pastoral care until 1989 when she retired from Providence Hospital. Upon her retirement she went to St. Anthony’s Home for 4 years as coordinator and sacristan. She then returned to the Motherhouse. Sister Mary Edgar’s name became synonymous with Providence Hospital for many of the people of Moose Jaw. In 1985 she received an Award of Service to Providence Hospital and community for the years 1942 to 1985.

The Mass of Christian Burial, held in the Chapel of Mary Mother of Compassion, Providence Motherhouse on July 10 was presided over by Most Rev. Brendan M. O’Brien, Archbishop of Kingston. Msgr. Don Clement delivered the homily.