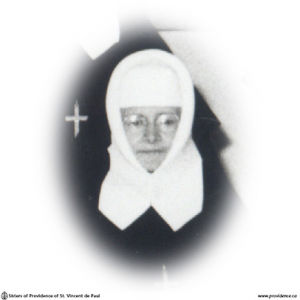 Gertrude Maud Marchand, daughter of Charles Ed. Marchand and Susan Bertrand, was born in Kingston, November 15, 1892, and educated in this city by the Sisters of the Congregation of Notre Dame. In 1917 she entered the novitiate of the Sisters of Providence and made her profession on August 20, 1919, taking the name of Sister Mary Edith.

The work she was most interested in was cooking, and throughout her religious life of almost fifty years she devoted herself generously and enthusiastically to ministering to the corporal needs of her neighbour. In Maryvale Abbey Boarding School, Glen Nevis; St. Mary’s Convent, Chesterville; St. Joseph’s Vocational School, Winnipeg; and then for fifteen years at St. Mary’s of the Lake Hospital, Kingston, the Sisters, students, patients and employees were cheered by her constant, kind attention to their physical well-being, and even more by the sunshine of her happy life. One thinks immediately of Sister Mary Edith in reading sentences from one of Abbe Courtois’ books; “Whether it be with children, with the sick, or with unbelievers, there is an attitude which gives confidence and awakens sympathy: that of a Sister who, one feels, is happy in her faith, radiantly joyful in belonging wholly to God and in revealing Him to men”

In 1966 her Superiors knew the demands of a large institution were too great for her failing strength, especially since she was far too generous to learn to supervise only, and have her staff (and it was adequate and willing) do the major part of the actual work. Consequently she was assigned lighter duties at the infirmary of the Mother House, but even here she worked beyond her strength.

In November 1968 she was admitted to Hotel Dieu to have cataracts removed from both eyes. She seemed in good condition and spirits after the first operation, and showed no anxious concern over the prospect of the second. But it must have proved too much for her. When she returned to the Mother House, she could not eat and was extremely weak. As days went by she did not improve, and the doctor had her brought back to the hospital. She received the Sacrament of the Sick before leaving, but we did not think that she was in danger of death. For a few days, she seemed better, but during the night of December 19 she fell into a coma and never regained consciousness. For four days and nights doctors – several of them – and nurses worked hard to save her; some Sisters from the Mother House remained with her night and day; and on December 23, 1968, at 11.15 p.m. she quietly breathed her last.

A post-mortem examination revealed that many of her organs were affected – liver, stomach, pancreas – and she must have been enduring for some time much suffering of which she never complained and which she never allowed to cause any slackening in her service to others.

The best eulogy on Sister Mary Edith is the simple comment written almost ten years before her death by one of her local Superiors: “A very generous, kind, patient, hard-working Sister, punctual in all her religious exercises, and practicing charity toward all.” Another sincere tribute was paid by a non-Catholic woman, an employee of St. Mary’s of the Lake Hospital, who brought in a Mass stipend, and as she stood weeping over the casket said: “I worked with her for twelve years.”

Her funeral Mass seemed most appropriate. In the chapel with its Christmas decorations of red poinsettias and roses and white mums, in white vestments, Monsignor J. G. Hanley in the absence of His Grace the Archbishop, concelebrated with Msgr. Bernard Walsh, rector of the Cathedral and Father Michael Farrell. For the first time the new liturgy for the funeral Mass was used and commented on by Msgr. Hanley, the foremost liturgist of the diocese. Monsignor called attention to the emphasis on the Resurrection and the joy it inspires in all present. Joy was the key word in Sister M. Edith’s death as it was in her life.

Of her large family of twelve, only one brother survives, Mr. Ed. Marchand of Hamilton, and he was too ill to attend the funeral. Several nieces and nephews were present from Kingston, Toronto and Buffalo, and four of the nephews acted as pall bearers.