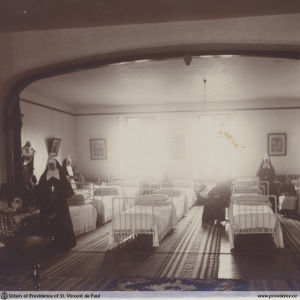 The death of Sister Mary Edmund, House of Providence, on Saturday, May 26th, has called to a better life a glowing example of self-sacrificing devotion to all conditions of suffering humanity.

While her work was not performed in the lime light, to be applauded by the world, her gentle and skilful ministrations were bestowed on the poor, the sick and the abandoned.

The last seven years of her life were spent in the immediate care of the old and infirm men of the Institute and a convincing proof of her success in appeasing their often unreasonable complaints was to witness their sincere grief when informed that she was dying.

Several of them came in their helpless condition and asked to be shown the window of her room, they there recited the Rosary of Our Blessed Lady while tears streamed down their time-worn cheeks. One old man echoed the feelings of all by saying God bless her; she always had the kind word and helping hand.

A poor crippled man, who is wholly dependent on the kindness of others, begged to be brought to the Community room where her beloved remains were awaiting burial. On beholding her, he wept bitterly, saying he had lost his best friend. Angels must have gathered those tears and presented them to her Heavenly Spouse to be placed by Him as the brightest jewels in her crown.

Sister entered the Novitiate of the Providence at the age of nineteen, having spent sixteen years in active service at the time of her death.

Requiem Mass was sung in the Church of Our Lady of Sorrows by Rev. Father Hanley, Rector of St. Mary’s Cathedral, Rev. Canon Kavanagh, Almonte, Deacon, and Father Coyle sub-deacon. There were also in the Sanctuary Rev. Msgr. Masterson, Fathers Brady and Clancy of Kingston.