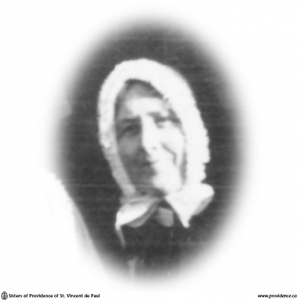 Alice Dorinda Smith, a daughter of John Smith and Margaret Trainor of Maplewood, P.E.I., was born on November 28, 1895 and baptized one week later at St. Joseph’s Church, Kelly’s Cross, P.E.I. Later the family moved to Charlottetown.

The Smith home must have been an exemplary one, for of the five sons and two daughters; four were called by God to His immediate service in the church. Two boys, Lawrence and Russell, were ordained to the priesthood and the two girls embraced religious life. The elder daughter became a Sister of Mercy.

From her school days, as Father J. A. Murphy of St. Dunstan’s University her spiritual director wrote, Alice cherished the ambition to become a Sister, but she felt it her duty to remain with her mother and keep the home together while her brothers were being educated, the two for the priesthood and the remaining three as doctors. In 1931 her mother went to live with a married son and Alice at last felt free to pursue her vocation. Her director had seen the work of our Sisters in Edmonton and it was at his suggestion that she made application to our congregation. Two years later she made profession as Sister Mary Edmund.

After her training and experience had fitted her for office work, she spent most of her active life in the business offices of different houses of the Institute – twelve years in the General Office at the Motherhouse, and terms at St. Francis Hospital, Smiths Falls and St. Anthony’s Home and Providence Hospital, Moose Jaw. She served as Local Superior at St. Mary’s Orphanage, Edmonton, St. Gregory’s Picton, and St. Mary’s Chesterville. For the past four years she had been stationed at St. Joseph’s Convent, Belleville.

In November 1969 she suffered a heart attack and after six weeks in Hotel Dieu came to the Infirmary at the Motherhouse. Her strength returned slowly, and by April first she was able to enter on the annual retreat. She was able to follow every exercise either from the infirmary gallery of the chapel or from her room where she could hear all the conferences over the P.A .system. The day after the retreat closed, April 9, she went to the hospital for a check, planning to return in a day or two to her mission in Belleville. That evening she complained of feeling very tired, but no one was surprised as she had not had so much exertion for several months. Sister Mary Alban saw her at bed-time and gave her some medication. In the morning Sister Helen Killeen, the night nurse, went to her room to see if she wished to be taken to the chapel for Mass. She said she still felt tired and jokingly added that she thought she would take a “free day”, but would receive Holy Communion when Father brought the Blessed Sacrament to the floor. As she did not complain of any pain and her breathing was normal, Sister Helen thought she was all right and all the staff went to Mass. When a Sister went to her room after Mass to check before the priest would enter, she found Sister Mary Edmund dead. The nurses believed she could have been dead only a few moments, and there was no indication of any struggle. The chaplain anointed her immediately.

Was it not a beautiful way to go to God – after a retreat and while waiting for Holy Communion? But then Sister Mary Edmund was always “waiting for God.” One of the last books she had from the library was Father Rahner’s “Watch and Pray with Me.”

We sent wires to her sister, Sister Mary Laurentia of Fall River, Mass., the only surviving member of her immediate family, and to a sister-in-law, Mrs. Deborah Smith of Charlottetown. The latter called by phone to get the details. She had spent a few days with Sister about two weeks before, and did not feel equal to returning for the funeral. Two families of cousins motored from Ottawa for the funeral, Mr. and Mrs. R. Trainor and their daughter and Mr. Trainor’s sister, Mrs. Dewiss.

The Archbishop offered the Mass on April 13 and, as we had just finished a meeting of Local Superiors from all our Canadian houses, there were many more Sisters than usual to assist at the Mass and accompany the remains to the cemetery. The pall bearers were the three Sisters from St. Joseph’s Belleville, Sisters M. Avila, Clarissa and Noreen, and Sister Margaret McDonald, a novitiate companion.