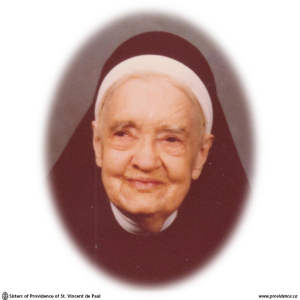 On January 22, 1983, the oldest member of the Sisters of Providence of St. Vincent de Paul was called to her eternal reward. Three months had elapsed since Sister Mary Edna passed her ninety-sixth birthday and seventy-five of these years she had spent in religious life.

Mary Edna O’Meara was born in Yarker, Ontario, one of the family of six of John O’Meara and Helen Leveque. She was baptized in the church of St. Anthony of Padua, Centreville.

When she completed Grade XII of high school, she must have attended a Model School – a four months’ course in teacher training which existed in most Ontario towns at that time, and which granted a Second Class Certificate valid for five years – for she taught for four years in local public schools.

On August 15, 1908, she entered the Novitiate at the House of Providence and two years later pronounced First Vows.

During her hears as Postulant and novice she, with two companions, attended classes at Kingston Collegiate Institute in what was later called Grade XIII. At that time successful completion of this course with sixteen credits admitted a student to a Faculty of Education at an Ontario University. After a year of study and teacher training here a student would be granted a First Class Public School Certificate and a High School Assistant’s Certificate. Sister Mary Edna qualified for entrance to the Faculty of Education, but her fellow – Sisters did not, and since in those years a Sister had to have a companion when away from her convent Sister Mary Edna was sent to Ottawa Teachers’ College with a companion whose qualifications admitted her to that school.

She was then assigned to St. Francis Xavier Boys’ School in Brockville, and during four years there she studied extramurally at Queen’s Faculty of education, graduating with honor’s in 1914.

The following year she was appointed as Sister Mary Jerome’s assistant at Maryvale Abbey High School where she taught for seven years. During these years she attended summer courses in physical education and qualified first as a supervisor and then as a specialist.

But intensive study and assiduous concentration on preparation for high school classes caused too great a strain on her eyes and in 1922 she was obliged to give up the work she loved and in which she was eminently successful.

She did not, however, give up teaching. She spent thirty-five more years in the grade schools of Kingston diocese. In St. Mary’s, Kingston, she taught for fourteen years.  Grade Seven boys – over forty at one time – and many more in the city in later years could vouch for her efficiency. Twelve years in Prescott and nine in Trenton before retirement in 1957 completed forty-nine years of service in the schools of Ontario. To her work in the classroom was added the duty of Local Superior for a term in Prescott and in Trenton.

From 1957 to 1966 she served as Local Superior in Gananoque and in St. Joseph’s Convent, Belleville, before coming to Heathfield.

Here she remained active, rising for prayer and Mass with the Community and assisting at a later Mass in the infirmary oratory. Her mental faculties remained alert and although she could not read much because of the condition of her eyes, she was privileged to have Sisters do spiritual reading, and she retained a keen interest in Community happenings and church events in the world as recorded in the “Catholic Register”. She was an avid bridge player and every evening until her last two years enjoyed an hour of the game.

Although suffering from arthritis she refused to become inactive, walking first with a cane, then with two canes, and finally with a walker, until after being admitted to the hospital floor of the infirmary she was obliged to use a wheelchair.

On November 9, 1982, she developed respiratory trouble, then pneumonia, and finally paralysis of the throat. For two and a half months she required almost continuously oxygen and intravenous. Although she could not speak, she remained conscious, smiling and giving signs that she recognized visitors and could hear the prayers that were being offered. Besides the Sisters and Infirmary staff, a devoted niece, Mrs. Eileen Murphy, of Kingston, kept constant vigil at her side.

On January 22, just as the 4:45 p.m. Mass was finishing, she breathed her last. Sister Muriel Gallagher (Superior General) Sister Marion Farnand (her Superior) Mrs. Murphy and two secular nurses were with her.

May we not believe that Sister Mary Edna, who throughout her long life had such devotion to the Mass, united herself at that moment with Our Lord in His last words, “It is finished, Father, into Your hands I commend my spirit.”

The funeral Mass was offered by a grand nephew, Fr. Gerald Dillon, C.S.B., with concelebrants Fathers Raymond Shannon, Bernard O’Neill, Paul McAvoy and Brian Price, a former pupil who gave the homily. The prayers of Final Commendation were led by His Grace Archbishop Spence.

Sister Mary Edna will be remembered for her many years of faithful efficient service, but even more for her example of a fervent religious.