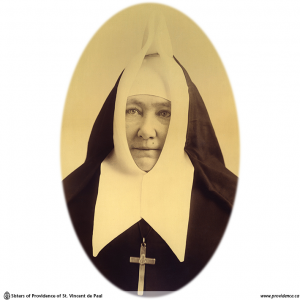 It is a task of some little difficulty, and of no little delicacy, to treat properly of one who has lived and died in our own time, and it is quite possible that the author of this sketch has said either too much or too little, and in consequence has fallen into some inaccuracies. But if this attempt should have the effect of stimulating some one better qualified to devote herself more successfully to the work, her humble efforts will not have been wholly in vain.

Amongst the favoured ones whom God has raised up in our Community few, if any, have been more distinguished that she who is the subject of this sketch.

Mother Mary Edward, known in the world as Catherine McKinley, was the daughter of John McKinley, ship owner, and Sarah McCaffrey. They were both of Irish descent and possessed in a large degree the open-heartedness of the Irish character. They were held in the highest esteem for kindness and charity especially to those living at a distance from church and market. Those weary travelers were refreshed, nourished and often harboured, particularly those who were to approach the Holy Table on the morrow. The McKinley home became to them a half-way house.

God was pleased to reward this charitable couple with a family of two sons and one daughter, the youngest who was born September 5, 1838, and received in baptism the name Catherine. (Note: There is an error here: the baptismal certificate gives September 5th the date of Baptism and August 14th the date of birth.) The years of her infancy and youth were spent under the parental roof. This child of predilection having no sister to share in her innocent amusements was easily led to join her brothers in all the feats and frolics of boyhood life.

Thus did Catherine pass the first decade of her life without the slightest apprehension of the dark clouds that were hovering over her until it pleased God to test her affections, and put her life to the severe trial of trust in Providence. Death had doomed her mother to an early grave, leaving Catherine to her own responsibilities. Her mother’s death and her father’s long absences from home during the summer months had a telling effect on Catherine. In consequence, her education was limited and the vigilance and care of a mother were absent.

Catherine’s natural impetuosity and a quickness of temper prompted her father to remarry and place her under the discipline of a step-mother. Catherine had now attained that age when the authority of a step-mother was rather obnoxious to her spirit of self-sufficiency. The fondness she entertained for her brother William, who was then married and living in Oswego, induced her to abide with them until she learned the art of dressmaking. Being an independent character she wished to be able to support herself without drawing on her father’s income. But as Catherine grew in age and wisdom she began to realize that there was something nobler and loftier in attainment than that which her present avocation afforded.

It was about this time that our beloved founder and Bishop, Rt. Rev. E.J. Horan, succeeded in carrying out a plan that had burned in his brain for years. His Lordship applied to the Sisters of Providence of Montreal to establish a house similar to theirs in Kingston, a request which was granted. On December 13, 1861, the House of Providence, Kingston, was opened by four Sisters from Montreal with Mother Mary of the Blessed Sacrament Superior of the new foundation. When Catherine McKinley heard of the new religious Order in her native city, she became animated with the fond hope of being the first subject in the new Order of Sisters of Charity. She approached the Superior and acquainted her with her desire. Her request met with a favorable reply and on the 25th March, 1862, Miss McKinley was accepted as the first Postulant.

During her Novitiate, though not of a robust disposition, she labored as directed. She fell a victim to the dread disease of small-pox which necessitated a long separation from the Sisters. She also suffered frequent attacks of quinsy which were at times very severe. After two years she made Profession taking the name Sister Mary Edward, and very soon after Profession she was sent to open a teaching mission in Belleville. (The Bishop recalled the Sisters from Belleville after one year without giving them or the people of Belleville any warning.)

Five years after the founding of the Kingston Institution and sooner than had been expected, the Foundresses were summoned to their Mother House in Montreal. Sister Mary Edward was appointed to assume the onerous charge of Superior of the infant Community. You may be sure this was a heavy cross to shoulder, but with trust in Divine Providence and relying on the goodness and aid of her ecclesiastical Superior, she took over the reins of government.

Mother Edward soon learned that the road Superiors had to travel was not strewn with roses. She often watered her pillow with tears when reflecting on the awful weight of her responsibilities. It was during these solitary moments that she learned the true meaning of the words addressed to her at her reception of the Holy Habit: If you wish to become a servant of the poor, you must renounce yourself, take up your cross and follow Jesus Christ”, and her spirits were uplifted by the words, “Fear not. It is I.” With these spiritual supports Mother Edward traveled along the steep road to Calvary. On all sides there was misery and want, indeed, enough to break down the strength of the strongest. But Mother Edward was not one of those “to lament over what they take no pains to remedy”, and her superhuman zeal achieved whatever she undertook, under the fatherly guidance of Bishop Horan. The poor accommodations for Sisters and their charges grieved her maternal heart, and to better their conditions she sent the Sisters, who numbered about twelve, two by two, into the parishes to collect. Mother Edward’s trust in Divine Providence and in good St. Joseph were the staffs she leaned on through this thorny way. Applications for the admission of the poor and orphans kept pouring in, and it grieved her motherly tenderness to refuse shelter to those chosen ones of Our Lord, but limited accommodation rendered a refusal unavoidable. Mother Edward then undertook the task of improving conditions. In 1871 she erected an addition to the House of Providence.

In 1872 Mother Edward’s term of office had expired and the gentle Mother Mary John succeeded her. In 1873 the first branch of the Institute was established at Holyoke, Mass.  Mother Edward was appointed Local Superior of the mission which grew rapidly for 19 years, and 30 candidates from that area were admitted to the Novitiate in Kingston. When Mother John’s sudden death in 1883 necessitated a new election, Mother Mary Edward was again elected Superior General, and again served two terms. It was during this time that the separation of Holyoke from Kingston occurred. This was a sharp blow to Mother. She relied largely for aid from this thriving mission to help discharge the debt on the second wing which had been added to the House of Providence in 1892.

Brockville and Perth missions were opened during her administration. And now, though she had spent 18 years in the general management of the Community, her allotted time had come to an end. On July 6th, 1896, the government of the Community passed into the hands of Mother Mary Scholastica. Mother Edward was appointed First Assistant.  Though broken down with the weight of years of affliction, Mother Edward assumed the guidance of St. Peter’s Convent, Trenton, in 1902. While here it became quite perceptible that Mother Edward was giving indications of an early call beyond the bourne.  Rheumatism had so crippled the good old Mother that it was pitiful to see her moving along on crutches. Her last effort was to view the remains of Reverend Father Twohey, pastor, who was brought home a corpse from a distant city. She survived him, who was her greatest consolation during her term of superiorship in Trenton, by only one month.

Soon after pneumonia set in and though she battled hard against it, the agent of God, whom no man can resist conquered. His Grace, Archbishop Gauthier, went to Trenton to prepare her for death. Gladly did she receive him, as an angel from Heaven to open to her the portals that lead to the Heavenly country, reserved for those who have fought the good fight, kept the faith and persevered in religion until the end. Mother peacefully yielded her soul into the hands of her Creator, November 21, 1904. The remains of this revered and much lamented Mother were conveyed to Kingston by the Sisters who cared for her in her last illness.

Bitter were the tears shed by the Community when viewing all that was mortal of that great heart that had so often taken to its fond embrace her Sisters and inmates. Solemn Requiem Mass was sung by His Grace, Archbishop Gauthier, assisted by deacon and subdeacon. An appropriate sermon was rendered by Reverend Doctor Salmon, which brought tears to the eyes of all present.

Mother Edward is gone. The great, the good and revered Superior, who held in succession the offices of Superior General, Assistant General, Local Superior, General Treasurer and Mistress of Novices. And though Mother Edward was mainly devoted to the comfort of the poor, the orphan and the sick, she did not lose sight of the fact that if she wished to bring her Community to a standard, her Sisters must be educated. For this end she persisted in having an hour of class study every day in the Novitiate. Her delight was to have her subjects so informed that they could compete with educated Orders. A daily school for Sisters who were to teach was established, and two summer schools were given by Professors Suddeby and Houston. She favoured any undertaking in the interest of education, thus enabling the Sisters to stand on their own merits before the educated public.

“UPWARD AND ONWARD” was her motto. May we follow in her ways. May she rest in peace.