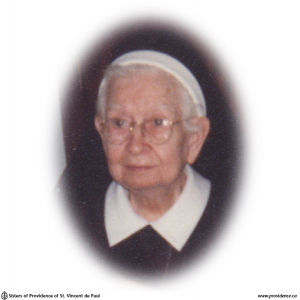 On May 27, 1982, the Sisters of Providence of St. Vincent de Paul gave back to God one of their eldest members, Sister Mary Edward, aged ninety-four years and seven months.

Sister Mary Edward (Rose Mary Quinn) was a descendent of one of the pioneer families who emigrated from Ireland in the early years of the nineteenth century and settled in Ferguson’s Falls, a district half way between the present town of Carleton Place and the village of Lanark. Records tell us that Bishop MacDonell, the first Bishop of Upper Canada offered Mass in the Quinn home when he visited the scattered missions of his large diocese. Sister Mary Edward’s parents, James Quinn and Elizabeth McNaughton, brought up eleven children in the tradition of their ancestors, instilling in them devotion to the Mass and to the Rosary. They were rewarded by three religious vocations, Sisters Mary James and Edward, and a grandson, Rev. Edmund Quinn, CSsR, now a pastor in Saskatoon, Sask. Sister Mary James died in 1949 after forty-three years as a Sister of Providence; Sister Mary Edward’s religious life lasted almost sixty-nine years.

Sister received her early education in the local school, then attended Lanark High School and Ottawa Teachers’ College. She taught for four years in elementary school before responding to Christ’s call to follow Him more closely. She entered the Novitiate at St. Mary’s of the Lake on August 15, 1913, and after profession resumed her teaching apostolate in various schools of the archdiocese: Portsmouth; St. John’s, Kingston; Smiths Falls; St. Mary’s, Kingston; Tweed and for thirteen years at St. Michael’s, Belleville. In 1946 she was appointed to Arnprior in Pembroke diocese, where in 1959 she completed a teaching career of almost fifty years.

For four years she served at St. Mary’s of the Lake Hospital, Kingston, as visitor to the patients, retiring to the Infirmary at Heathfield in 1967. For most of her fifteen years here, in spite of a fractured hip which necessitated the use of a wheel chair, she remained active. Her mental faculties were unimpaired, her sight phenomenal for one of her age. So she kept herself occupied, when not praying in the chapel, repairing rosary beads or making new ones. Visitors to the Infirmary who saw her work sent her boxes of beads, some from broken rosaries, some from necklaces, and with new wire and a couple of sized of pincers, she made countless rosaries to be sent to missionaries.

On February 28, 1982, she developed symptoms resembling St. Vitus Dance and was sent to Kingston General Hospital. There all kinds of tests failed to disclose the cause of the trouble and she was discharged on March 23rd. Her condition improved slightly until March 20th when she was admitted to Hotel Dieu Hospital for possible pneumonia, but what was found was cancer of the lungs. No treatment could be given and she returned to the infirmary on May 26th. For twelve hours she suffered agonizing pain. At 1:00 p.m. on the 27th God released her. The priests of the diocese were making retreat at our retreat centre and Father E. Keyes, a former pastor of her home parish of Lanark, and Fr. D. Ryan, chaplain, prayed at her bedside, along with the Sisters until a short time before she died.

The Mass of the Resurrection on May 31st was a liturgical celebration which surely would have brought great joy to Sr. M. Edward. The main celebrant was His Grace Archbishop Wilhelm; concelebrants were Fr. Keyes and Fr. Ryan, and Rev. Michael Killeen, O. Praem., Abbot Emeritus of St. Norbert Abbey, De Pere, Wisconsin, who was at Heathfield for the Golden Jubilee of his cousin, Sr. Margaret Killeen. Abbot Killeen is a nephew of the late Fr. Charles Killeen, who was pastor of St. Michael’s, Belleville, during the many years Sister M. Edward taught there. Two grand nieces, daughters of James Quinn, Ferguson’s Falls, did the two scripture readings of the Mass.

Besides James Quinn and his family, another nephew Frank Quinn, with his family and a niece, Loyola of Ottawa and her family attended the funeral.

Sister M. Edward will be remembered as a fervent religious and a zealous teacher, who retained until her last days devotion to the Mass and to Our Lady’s Rosary.