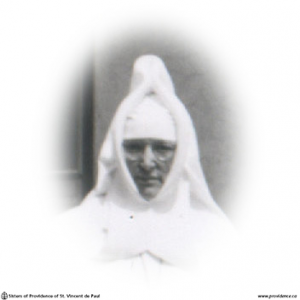 Sister Mary Eleanor, Elizabeth Shanahan, died Tuesday, April 16, at St. Vincent de Paul Hospital, Brockville, where she had been a patient for the past three years. Sister’s birthplace was Fortune Harbour, Newfoundland and her parents were Thomas Shanahan and Elizabeth Lyver of that locality.

Before she entered religion, Miss Shanahan had lived for awhile in Montreal at business. While there she learned of our Community and came to Kingston to see for herself and become acquainted with the Sisters. Impressed with her visit she decided to enter and having sought admission she was accepted as a postulant in the spring of 1915.

On completion of her Novitiate in 1917, she was admitted to profession, and her first appointment was to St. Vincent de Paul Hospital, Brockville. She was accepted in the Training School as a student nurse, and when she graduated she remained on the hospital staff at St. Vincent’s for a number of years. Later she spent several years at St. Francis General Hospital, Smiths Falls, St. Mary’s Hospital, Montreal, Providence Hospital, Daysland and St. Joseph’s Vocational School, Winnipeg.

Sister M. Eleanor was a very efficient nurse, and kind to her patients but she found the work trying on her strength. In failing health she returned to the Mother House on more than one occasion to recuperate, until finally she was admitted to St. Vincent’s as a patient suffering from a serious cancerous disorder. Realizing that she was gradually nearing her eternal home she made use of the time at her disposal to prepare her soul and suffered with admirable patience to the end.

Two nieces, Mrs. Brodrick and Miss Geraldine Polan attended the funeral; they and their brother, Dr. Polan of Montreal, are the only surviving relatives. His Grace Archbishop O’Sullivan offered Solemn Requiem mass for the repose of her soul. The funeral was held from the Chapel of the Mother House, Heathfield. Besides the priests assisting the Archbishop the Mass, there were several members of the clergy present at the Mass, especially from Brockville where she was so well known. Burial was in St. Mary’s cemetery.