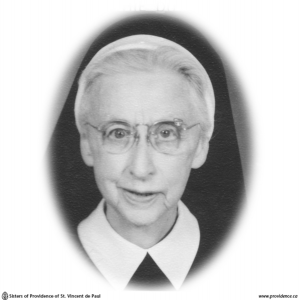 “Happy the one who has heard the call of Jesus to a life of identification. Amid all turmoil you have found the lasting peace of a True Spouse of Jesus. Increasingly make void the self within yourself; petition Jesus to plunge Himself so deeply in you that now and forever you may super abound with Him.”

During the April, 1963, retreat Sr. M. Electa (Murphy) penned the above reminder on the back of a holy card to encourage herself in pursuing the virtues called for by her religious vocation. For over forty years she had been happy in her “life of identification” and she planned to use the years which lay ahead to perfect her union with Jesus. Prayer, the work assigned to her and community living were the main channels of union, but in the last years of her life that oneness took on the added form of physical and spiritual suffering. Undaunted, she continually studied and practiced the art of offering and constantly confirmed the gift of herself that she had made on the day she entered. Never did she lessen her commitment.

Margaret (Marguerite) Bridget Murphy was born on January 4, 1897, in Perth, Ontario. Bearing the names of her two grandmothers, Margaret Kehoe and Bridget Breen, she was raised in a typical Irish-Canadian farm home. Her parents John Joseph Murphy and Margaret Ellen O’Neill, while born in the Perth-Bedford area, were only one generation away from Ireland. The farm on which they made a home for their two daughters and four sons had been in the Murphy family since 1870 and was to remain so until 1975.

Marguerite began her education in the county school at De Witt’s Corners (SS #4 Bathurst) and from there went on to Perth Collegiate. Knowing that her room and board was an additional expense that the family could barely afford, she was happy to be able to bring home excellent marks in her studies. She graduated from Grade XIII at the age of seventeen with sixteen subjects to her credit, having taken four languages – English, French, Latin and German. She was awarded a Carter Scholarship for having the second highest aggregate marks on Grade XIII Departmental Examinations for Lanark County.

Along with her facility in languages, Marguerite Murphy also had a great love for history. However, it was not until well on in life that she was to have time to follow this attraction. Meanwhile, she was living in an age of very momentous events. No doubt, she watched history unfold with keen interest. In the summer of 1914, as she prepared for university, war was declared in Europe, St. Pius X died and Benedict XV was declared Pope.

Marguerite chose Queen’s University for her higher studies. She had decided to become a teacher long before finishing high school and so enrolled now in the Faculty of Education. Actually, she had hoped to teach for a year first to help defray her expenses, but found no job opportunities open to her as she lacked training. She was blessed with parents willing to continue skimping and saving so her education would not be delayed. While studying at Queen’s, Marguerite boarded at the House of Providence. She had come to know the Sisters when they called at her home on their collecting tours. In her own words, “she was fascinated by them.”

The Annalist of this period noted that the House of Providence was bulging at the seams with aged and orphans and there was a long waiting list. She also records that in December, 1914, a Novena was made to Our Lady of Victory to ask for vocations to the Community, “especially teachers”. The Sisters’ services were much in demand and new members were needed for all their works. Marguerite Murphy was to be part of God’s answer to those prayers. After three years of teaching in the country schools at Drummond and Stanleyville, near her home, her First Class Certificate as a Public School Teacher in hand, she applied to enter the Sisters of Charity of the House of Providence. It was 1919 and the Basil Case was still the talk of Kingston, the court decision having been brought down only months before and the settlement not yet completed.

During her Postulancy, Novitiate and first two years of temporary profession Marguerite taught Grade One at St. John’s School, Kingston. In those days, there was no canonical year of study such as we have now. At Profession Sister took the name of “Electa” out of admiration for Sr. M. Electa of the Congregation of the Holy Names of Jesus and Mary. They had met at Queen’s and the example of this Sister’s sterling combination of happiness and zeal had been part of Marguerite’s decision to enter.

In 1923, a year before her final vows, Sr. M. Electa was assigned to Glen Nevis, where she was to remain until 1950, except for 1945-1947 when she taught high school at St. Michael’s, Belleville. While at the Glen, she completed her Bachelor of Arts from Queen’s in 1925 and, while at Belleville, she took some advanced studies in the summer at the University of Windsor. From 1936-1945 and 1947-1950 she was principal of Maryvale Abbey, teaching mostly language courses. She had obtained her Permanent High School Assistant Certificate in 1939, the year World War II broke upon the world.

Sister is well remembered by her students for the clarity and thoroughness of her teaching; but, also, for her fine personal qualities. One testimonial letter described her as a “very courageous, skillful and delightful woman”. Monsignor D. R. Macdonald, pastor at the time, said she taught “with great success”. After leaving the Glen she kept track of former students and wrote to many of them as they advanced to moments of personal honour. All responded appreciatively and affectionately.

During her years of teaching and afterwards, Sister was frequently asked to be a guest speaker. Her knowledge of literature, her command of language, her oratorical prowess and her belief in the value of education made her exciting to listen to. Once after attending a Catholic Curriculum development conference, she delivered a twelve page report! Learning and passing on what she had learned were esteemed duties for her.

In 1950 Sr. M. Electa was elected First Assistant to the new Superior General, Mother M. Jean (Walker). She humbly kept a low profile in this important office, according to a teasing little poem written by Sr. M. Clarissa (Whalen) to celebrate the occasion at Glen Nevis.

The Mother General came along
And looked on every side
To see where our “Assistant”
Had run away to hide.

One of the first tasks given her as Assistant was to write a history of the Community to mark its 100th anniversary in 1961. This was a chance for her to indulge her love of history. What, with summers full of housecleaning, marking students’ departmental examinations and teaching catechism, she had never had time to read anything above what her lessons and  study preparations required. Now she read all the Annals of all the houses and every other possible source of information and painstakingly worked up her manuscript taking full ten years allotted for the task. The file of congratulatory letters in her office attested to how well her book was received both within the Community and outside.

In 1953 she was again chosen first Assistant and in 1959 was made third Councillor. With the change to a new Superior General in 1965, she became Secretary General to Mother M. Lenore (Carter). She served Mother Margaret McDonald in the same capacity from 1971-1977. For twenty-seven years in all Sr. M. Electa carried the heavy responsibilities of a member of the General Administration. In that time Vatican II had left its mark on the church and North American Religious Communities had come through their most tumultuous years.

The care of the archives is one of the duties of the Secretary General. To make historical material more available to the Sisters and to enable them to educate the public, Sr. M. Electa, with Sr. Emily McDonald assisting her, set up a large Heritage Room in what was formerly Community room on the ground floor of the 1932 Wing of the Motherhouse. For her efforts in preserving Community history and in administration, Sister was honoured by the Chapter of 1981 with a testimonial statement of gratitude.

Because of her experience and expertise, when her work as Secretary General ended, Sr. M. Electa continued on as archival assistant. As long as her health allowed she tackled with enthusiasm all research projects that came her way. All but a few of the Sisters’ necrologies from 1950 to 1983 were written by her. She was affectionately referred to as “our walking history book”. If she was asked a question on come aspect of Community history, the questioner had to be prepared to spend an hour listening to her detailed answer.

All the labour of these active years had been sustained by fairly good health; but with the advance of years the physical problems common to seniors took their toll. Sister suffered a heart attack in 1975, another in 1977 with many angina episodes after that. Her hearing deteriorated, arthritis plagued her back, but most of all she minded the continual diminishment of her eyesight. In those days, Sr. M. Teresa Cole often read to her. The two Sisters had much in common being both former principals of Glen Nevis, language specialists, First Assistants, and lovers of fine literature. Sister M Electa greatly enjoyed their friendship.

Eventually Sister had to stop coming each day to the office and finally she was confined to bed as fluid accumulated around her heart. On June 12, 1985, in the 66th year of her Religious life, Sister M. Electa died in the Marian Infirmary of Heathfield. It was 5:05 p.m. and the Sisters were reciting the breviary:

Those closest to Sr. M. Electa knew something of the deep but simple spiritual life which she led. The prayers of the Community Prayer Manual and the devotions connected with our charism were her daily food. She found great joy in fidelity to Religious life as taught by the church. Asked about her life in community, she said, “My only trials were interior”. Her personal notes show that she endeavoured to use these to bring her closer to Christ and to save souls for Him.

In his homily Archbishop Spence said that we must live so that when death comes the relationship we have with God is not severed, but continues – faith must carry through, giving meaning to death. Sr. M. Electa lived in this way. Now, she is gone, but her written works and her example continue with us. These comments after her death testify to that.

“She was community – such a witness!”
“The most welcoming person in the whole house.”
“I admired her recollection at retreat.”
“A legend of holiness and perfection.”

For us, she was identified with Jesus. She did super abound with Him.

Sister’s life span covered some very important events in the history of the world, the church and our Community. We ask her intercession in being faithful in the future that lies ahead.