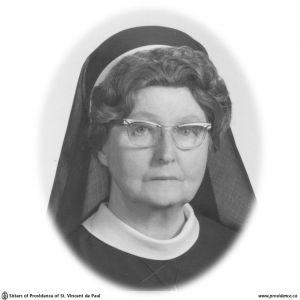 Mary Catherine McDonald, one of ten children of Hugh J. McDonald and Elizabeth McRae, was born on August 21, 1899, in Glen Roy in St. Raphael’s parish in Glengarry County. Her parents, who grew up in faith-filled homes, were courageous descendants of those hardy religious Scottish pioneers who had emigrated from Scotland to Canada in the 1800’s. True Christian values that were strengthened by family prayer and the recitation of the rosary in Gaelic motivated the McDonald family.

At an early age, Mary Catherine attended the local rural school, S.S. #17, in Charlottenburg, and completed her secondary school at Iona academy in St. Raphael’s, under the tutelage of the Holy Cross Sisters. She received her teaching diploma from Normal School in Ottawa and started her teaching career at Lorne School, Lochiel Township, and in Charlottenburg School, Glengarry County.

Mary Catherine answered a ‘call’ to become a member of the Sisters of Providence of St. Vincent de Paul on August 15, 1923. At First Profession on August 26, 1925, she took the name of Sister Mary Elizabeth. Sister was always proud of her Scottish heritage; proud, too, of her Catholic Faith and of the freedom Canada offered to everyone to worship God. Sister never lost her pride of family, of friends, of her Scottish ancestors. Her life became one of total commitment to God, to family, to neighbour. Sister strived faithfully to be a sign of and a witness to the teachings of Jesus.

She was always a happy person: joy, to her, was a much-prized virtue. She valued and appreciated life to its fullness: she loved music, dancing, a good Scottish joke or story and treasured all visits from the Sisters, her relatives, friends and students. Letters, too, were much-prized memorabilia.

Sister Elizabeth, already a trained teacher when she entered the community, became a valuable asset in the education field of her time. Over a period of 50 years, she used her skills and expertise in the roles of teacher, vice-principal and principal in various missions of the Community. For several years, Sister held the role of Superior in Montreal, Toronto and Belleville.

Sister retired from teaching in 1971 and undertook the sacristan’s duties in the Father Dowd Memorial Home in Montreal and, later in St. Peter’s Church, Trenton, where she was also the spiritual director of the Legion of Mary. Her love for children and youth, her interest in and concern for parents’ problems were remembered in her daily Mass and rosary (which was always in her hands or within a reaching distance), as well as world troublesome affairs and immoral stances that disturbed her.

Sister’s final years were spent in the Marian Infirmary at Providence Motherhouse. Her personal belief is summarized in her life’s story: “I was always happy to be a Religious Sister and to serve Divine Providence where and as God wished: the years have passed quickly but I can continue to pray. I am ready. I hope, to die when God calls me.” A memorable utterance from the lips of a truly great and spiritual woman who loved God, her family, her neighbour, her country, her church and her religious community.

Sister M. Elizabeth went to her eternal reward on November 21, 1992. At the farewell ceremony, one of her nephews led the singing of “Glengarry, My Home”. A niece pinned a piece of tartan on her habit and spoke feelingly about her much loved aunt.

The sacred funeral liturgy was celebrated by Archbishop F. J. Spence on November 24 and, at Sister M. Elizabeth’s request, Father R. P. Labelle, a distant cousin, delivered the soul-stirring homily. On arrival at St. Mary’s Cemetery, a Scottish piper awaited the arrival of the cortege to play a final farewell to this great McDonald clan. At the conclusion of the “Prayers of Committal”, he piped “Amazing Grace”, while the family joined in and sang along with the pipers. And, in such a fashion, was Sister M. Elizabeth laid to rest. One of her nieces was overheard to say:  “Now that was a send-off.”