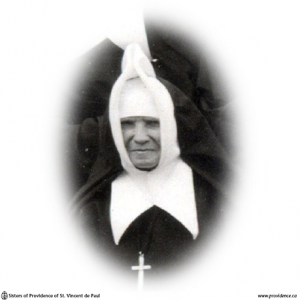 What stability of character, what tenacity of purpose, what deep spirituality marked the early Foundresses of our Community. Having left the world and all that it contained behind them, they came freely and willingly to devote themselves to God’s Service. No sacrifice was too great, no undertaking too burdensome. Their resolution had been taken, they must carry it out. They were giants as regards endurance and perseverance. Their noble examples of generosity and self-forgetfulness have no doubt, been a stimulus to many, and have earned for themselves never ending rewards. May God be glorified in them.

A shining example of these admirable qualities, we have in the person of our present sketch. Sister Mary Elizabeth, or as she was known in the world, Margaret Stafford was descended from an excellent Irish Catholic family. Her father and mother, Tobias and Elizabeth Stafford in the Township of Drummond in the Parish of Perth. She had several brothers, one, the Reverend Michael Stafford of this diocese and later of Peterborough, was a great temperance lecturer and won the appellation of “a second Father Matthew”. Her younger sister, Sister Mary Vincent, who entered the Community a year or more before, predeceased her several years. Like all the family Sister was of a very large build, tall and strong. Her very appearance would command respect at any time or place.

Born February 22, 1845, she entered the Novitiate at the age of 23 years on November 21, 1868. She seemed very much older. Being of that generous tendency, she had taken an active interest in all that concerned her parents and family, and her whole heart was bound up in their advancement and happiness.

But now this attachment occasioned a more than ordinary trial. She realized it to the full, and only her earnest continues prayer sustained her and enabled her to persevere in the path which she had chosen, and to which she felt she was called by God. She struggled on notwithstanding the many inconveniences, trials and hardships. She received the Holy Habit Dec. 13, 1869, and made Holy Profession May 31, 1871. These ceremonies always took place in the Cathedral at that time. She continued to be engaged in the works of the House, in the Kitchen, Wards, etc. We are told that she even gave direct aid in building the first addition that was made to the Providence.

In July 1880 she was sent on mission to Holyoke, Mass. Here she had charge for some time of the boarders’ department. Later she was given that of the boys’ clothes and sleeping apartments. On more than one occasion she with another Sister made extended trips collecting, bringing home at one time thirty four hundred dollars.

In 1888 she was recalled to the Mother House, and given charge of the men’s department. Here was her life work for which she had qualification and fitness.

She took complete charge of the apartment, and she had charge. She was mistress of the situation. She ruled as one having authority. There was no questioning, no back answers or insulting words would be tolerated. There was a rule to be observed and it must be followed. The time of rising and retiring had to be observed strictly. Extra morning prayers were said about 9:30 o’clock, at which all had to attend, after which she would read something spiritual or give a lecture. During this time she would take occasion to correct any disorders. Notwithstanding her great exactness she was very kind. Were any under her care sick or trouble, she was on fire to give relief. No sacrifice was too great in order that she might render assistance. As a result she was loved and respected by all. In later years, when given charge of the men’s sewing alone, yet she always kept a watchful eye on the ward.

Always having a great respect and regard for the clergy (they also had veneration for her), when the time came for her Golden Jubilee which was celebrated May 31, 1921, our Reverend Mother General thought well to invite the priests of the diocese to a dinner in her honour. The Archbishop offered the Holy Sacrifice of the Mass, as did also many of the priests, but did not feel able to remain. In all nineteen priests were entertained at dinner, and seemed to enjoy themselves very much. Oh, how happy and grateful Sister was. She also had some of her relatives, nieces and nephews to visit her. Being left perfectly free, she enjoyed a complete rest or holiday for one month. It was observed after that, she never tied herself down to work as closely as before. Still she continued to look after the work of her office for some years longer.

In the spring of 1924, she began to complain of illness, and after the departure of our Sister Mary Francis de Sales, when told that she should rest, and let younger hands take up the burden, she gladly acquiesced, remaining around the Infirmary, spending much time in the Chapel as she had always done.

After the joyous feast of Christmas and the New Year of 1925 was over, she retired to bed feeling very weak. It was thought well to have her anointed which was done January 9th. No longer able to take much nourishment, she continued to grow weaker and weaker day after day. She lingered on till the great feast of St. Patrick, from whom she had always a special devotion. She passed away without a struggle, without a motion at 5:15 a.m. March 17, 1925.

The funeral Mass, a Solemn Pontifical was offered by His Grace, Most Rev. M.J. Sprattt on Friday March 10th, assisted by Rev. T.P. O’Connor, Rev. F.D. Hyland, Rev. S.A. Corrigan and Rev. R.J. Coyle, after which the remains of our beloved Sister were deported in St. Mary’s Vault.