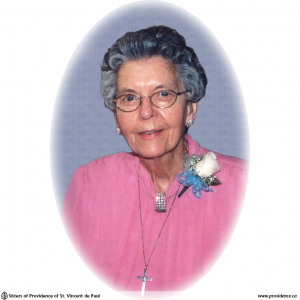 Mary Ellen Killeen, born in Timmins, Ontario, on March 29, 1921, was the fifth of seven children of Daniel Killeen and Anne Lennon.  She grew up in Timmins attending Holy Family School and Timmins Secondary and Vocational School.

On August 15, 1943 Mary Ellen entered the Sisters of Providence of St. Vincent de Paul in Kingston. After making her First Profession of Vows two years later and taking the name, Sister Mary Stephen, she was sent to the House of Providence, now Providence Manor, to look after elderly people. After one year she went to St. Mary’s of the Lake Hospital in Kingston where she was assigned to night duty. The next year she went to the orphanage located on the Motherhouse property.

In 1949 Sister went to St. Anthony’s Home in Moose Jaw where she again was on night duty caring for the elderly. The following year she was sent to St. Mary’s Orphanage in Edmonton. In 1950 she went to Rosary Academy in Athabasca to assist with the boarders. From 1951 – 1952 she cared for the patients at Providence Hospital in Daysland and then from 1953 – 1960 she cared for the elderly at St. Vincent de Paul Home in Athabasca.

In 1961 she graduated from St. Vincent de Paul Hospital in Brockville as a Registered Nursing Assistant. She then went to the Father Dowd Home in Montreal until 1965. From 1965 to 1978 she nursed on night duty in the Sisters’ Infirmary and for the next nine years she worked part-time at St. Vincent de Paul Warehouse in Kingston.

In 1987 she had a sabbatical year attending the Credo Program at Gonzaga University. In 1988 she returned to working part-time at the St Vincent de Paul Warehouse in Kingston and remained in that work until failing health necessitated her retirement.

Sister Mary Ellen was called home peacefully to her loving God in the 71st year of her religious life on Friday, October 3, 2014.

Sister Mary Ellen will be remembered as a prayerful person with a deep devotion to the Eucharist. She was a diligent and devoted woman who gently served those to whom she ministered.

The Mass of Christian Burial, held in the Chapel of Mary, Mother of Compassion, Providence Motherhouse on October 7th, was presided over by Rev. Robert Masters who also delivered the homily.