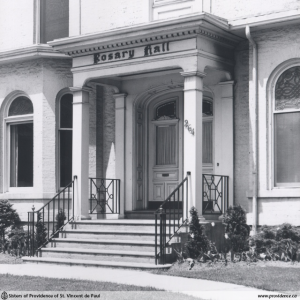 Sister M. Emerita died suddenly on Friday afternoon, August 25, at Rosary Hall, Toronto. Sister was the former Miss Veronica Barry of Morrisburg, Ontario, her birthplace. She was the third of the family to enter our Community. Her sisters – Sister M. Borgia and Leonard are teaching in Prescott. She entered the Novitiate on April 26, 1916 and after the regular term made profession in 1918. Later Sister M. Emerita went to Moose Jaw and trained there as a nurse at Providence Hospital, after which she spent several years there and at St. Mary’s Hospital, Camrose, Alberta.

Of a mild, gentle disposition, Sister was pleasant and agreeable, qualities which made her most desirable as a nurse. Her delicate health however prevented her from long continuing regular hospital duty, but she found other ways of exercising kindness and helping the sick in her work at the House of Providence and later as Superior of Rosary Hall, Toronto.

Sister M. Emerita had been in frail health for several months from a serious heart condition and suffered greatly from weakness and inability to accomplish many things she would like to attend to herself. The day she died happened to be the 33rd anniversary of her reception as a Novice. She attended all the regular exercises including Morning Prayer, Mass, etc., although she admitted not feeling well. After breakfast and attending to some duties in the sacristy and office she rested for about an hour, had a bath, changed to fresh linens, garniture [linens around the face], etc. and came to dinner as usual with the community. After the decades in the garden, Sister picked the two remaining roses – one for the Blessed Virgin and the other for St. Joseph, and so they were arranged according to her wish a little more than one hour only before she was with her heavenly friends in eternity. The same day she had the votive Mass of St. Joseph offered for a special intention for Rosary Hall.

During the spiritual reading at 2 p.m. after reciting the Veni Sancte and Litany of the Saints, Sister Superior, who was sitting in her usual place, got up and went to the couch where she lay back in a reclining position with her head resting on the pillow. The Sisters did not notice anything out of place for a moment until her breathing attracted their attention; they were with her at once to find that she had dropped into a sort of slumber from which she did not recover and to all appearances was not conscious of her surrounding. Just at that moment a priest called, Rev. J. Kennedy from Buffalo, who had never before met our Sisters (cousin of Sr. M. Scholastica) and when he saw Sister he knew she was dying and gave her absolution. He happened to have the holy oils in his car, having used them that morning, and anointed Sister who had the consolation or benefit of the Sacrament of Extreme Unction in her few dying moments. The doctor arrived from the clinic next door but could do very little as all was over in a few moments. Had the priest not been in the house at the time it would have been impossible to expect anyone to reach her in such short notice. As already mentioned Sister M. Emerita had made special efforts that day as if preparing herself and making ready in soul and body. It was not necessary to change a single garment or disturb a pin in her whole costume from when she had dressed herself that morning.

The circumstances of her death made a profound impression on her Sisters and friends. All felt that she was favoured at that awe-inspiring moment of death with special graces seldom granted in the same way at least. It was her thirty-third anniversary as a novice, and we trust it proved to be the great day of her triumphant entrance into eternal bliss.

Her nephew assisted the Archbishop at the Pontifical Mass of Requiem and read the prayers at the graveside in St. Mary’s Cemetery at her burial. Sister M. Borgia was present at the funeral but Sister M. Leonard was ill in St. Vincent de Paul Hospital and was unable to be present.