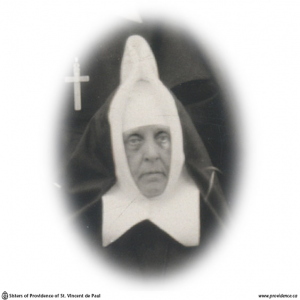 On May 28, 1938, Sister Mary Ephrem (Ellen Carr) passed to her eternal reward at the House of Providence, Kingston.

Sister had been ailing for some months, and realising that the end was approaching she calmly resigned herself to God’s will, awaiting the moment which would terminate her earthly sufferings and place her in possession of her true home.

Practically all her life was devoted to works of charity. She gave her untiring services to the sick and poor, tenderly caring for their needs. No work was too arduous for this self-sacrificing Sister, whether attending to the wards of the institution or visiting the poor in their homes.

In 1937, she celebrated her Golden Jubilee. Some weeks before her death Sister remarked that she would die on the twenty-eighth, and she did die on the morning of that date.