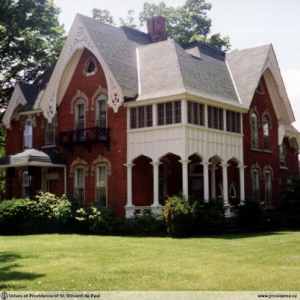 On the feast of the Annunciation 1908, a bright young girl arrives at the House of Providence for entrance into our Novitiate, permission for which having been granted a month previous. This person was Margaret Estella Kennedy of Centreville, Ont. who became after our Sister Mary Estella. Apparently healthy and strong, she bid fair promise to live and labour long for the Community and for the Master Whom she was directly to serve.

Born Sept. 12, 1883, she was then 24 years of age, though to all appearances she would be thought much younger. She was advanced to the Reception of the Holy Habit August 24, 1909 and to first Religious Profession August 30, 1910.

As there was a great demand for more teachers in the schools, she with others was sent to study. Later they attended the Collegiate Institute, Kingston, permission having been obtained from His Grace, the Archbishop.

After passing the prescribed examination, they attended the Normal School, Ottawa, and obtained permanent 2nd Class Certificates. Sister’s first appointment was to Glen Nevis where she spent more than a year. Her next appointment was to Perth. Here during her second year, she contracted a severe cold which necessitated her giving up and returning to Kingston. After a few weeks, feeling she was better, she wished to return to her class, the doctor advised that she take longer to rest, that a month of careful nursing was advisable. He told the Superior at the same time that there were signs of tuberculosis. She recovered, and took up work again at the beginning of another year. She taught after this successfully in Trenton, Belleville and Arnprior.

During the vacations she was permitted to visit her parents, in the hopes that a few weeks in the country each year would prove very beneficial. On one of these occasions, being very ambitious to live and labour, she was strongly tempted to give up her Vocation and return to the world  – indeed she was about to acquiesce. Her companion noticing this marked attitude, was very troubled, and persuaded her to come to Kingston. Here, time was given her to consider, and after many prayers being offered for her, she saw the error – the grave mistake she was making, her infidelity, and became repentant. She was ever after grateful to God for His Mercy and Goodness.

In February 1920 while teaching in Arnprior, she went to see the doctor, as she was not feeling too well. The doctor advised the Superior that she should be removed from class as her lungs were already diseased. She returned to Mother House. She remained in bed for a few days but was soon up and around, cheerful, hopeful of recovery, and continuing to study. She had taken up the work for First Class.

On April 10, she was surprised by a Haemorrhage, and a second following the next day, she asked to be anointed. She went down rapidly after, though keeping her cheerful manner. A third haemorrhage coming May 10, there was no longer any hope of improvement. She grew weaker day by day.

n the morning of May 21st, the announcement was made that Sister was really dying. We offered our prayers, Holy Communions and Mass for her, then gathered bout to furthered help her. Rev. Msgr. Masterson who had been here for a few days waiting to say his Mass, spent the time with her praying and pronouncing words of absolution. Also Rev. Father Keany, the chaplain, was in attendance. At 8:15 her spirit took its flight.

The funeral Mass was on Monday May 24, 1920, celebrated by Rev. A.J. Hanley, assisted by Rev. Father Joseph, Rev. D.R. McDonald and Rev. Father Hyland. Present also were Rev. M. McDonald, Rev. D.A. Casey and Rev. L.E. Staley. May she rest in peace and intercede for us.