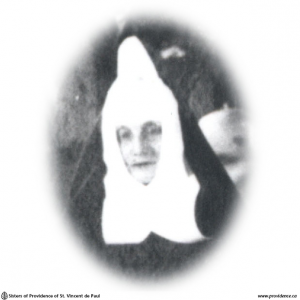 Sister Mary Esther was born at Mr. Chesney, Ontario, November 5, 1889, and baptized in St. Mary’s Cathedral, Kingston, on November 10th by Reverend Thomas Murtagh. Her parents were Patrick Fowler and Mary Dillon, a couple of strong Irish faith, from whose family of eight, three were called to serve God in religious life. Sister Mary Harold (Annie) entered the Congregation of the Sisters of Providence in 1907 and lived a laborious and happy life there for fifty-three years; the youngest son, Alex was a diocesan priest, but after a few years in the ministry his health failed and he has been a patient in a mental hospital for about thirty years.

Sister Mary Esther joined Sister Mary Harold in the Providence Community in 1920, and except for a few years in the convents of Tweed and Prescott devoted her entire religious life to the care of the aged and infirm at the House of Providence. For more than twenty years she and Sister Mary Harold had charge of the “Men’s Ward”. When failing health obliged her to give up such responsibility she exercised an apostolate of charity in visiting the sick, bringing invalids in wheel-chairs to the chapel, and walking to the parish churches for funeral Masses of former patients or benefactors.

In 1966 she retired to the infirmary and kept up there her acts of charity towards the sick Sisters.  While all noticed that her steps were becoming more feeble, she was able to be up and around and to go to the chapel for Mass and devotions until a week before her death. She contracted a heavy cold and congestion of the lung developed. On November 21, she received the Last Sacraments, and the following day we thought she was dying. However, she rallied and was able to speak to her family that day and the next day, Sunday. On Monday evening November 24th she suffered a hemorrhage and the doctor had her taken by ambulance to Hotel Dieu. As she was in Intensive care area, no Sister of the community could remain with her. The diagnosis was that the hemorrhage came not from the lung but from a vessel at the back of the nose, and after treatment she seemed to be in satisfactory condition, although still in intensive care. We were, therefore, shocked on Wednesday the twenty-sixth to receive word at 8.30 a.m. that she had just died.

In the absence of His Grace, the funeral Mass was offered on November 28th by Sister’s cousin, Father Keyes, P.P. of Lanark. Father gave a beautiful homily, remarking how appropriate for Sister Mary Esther were the white vestments and the joy of the Liturgy, since her long, fervent religious life gave every assurance that she was in possession of eternal happiness.