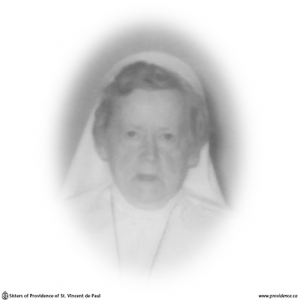 Katherine Ward belonged to an Irish-Canadian family of Montreal. Her parents, Patrick Ward and Elizabeth McGuigan were both born in Ireland, met and married in Montreal and their family of four grew up in that city.

Katherine was born on January 24, 1894 and baptized in the Church of St. Anne. In the years 1914-1916 a Jesuit priest, Father Cotter, directed twelve young girls from English-speaking parishes in the city to our Novitiate, eleven of whom persevered. Katherine Ward was one of these young women.

After profession as Sister Mary Ethelbert in 1918 she trained as a nurse in St. Vincent de Paul Hospital in Brockville and remained on the staff there for a few years. She then did post-graduate work in pediatrics and was sent to Providence Shelter, Winnipeg, where at that time our Sisters cared for children between the ages of 6 months and five years. When the Sisters were asked to take over an institution for older boys, Sister M. Ethelbert returned to the East and the last twenty-two years of her active life were spent in her native Montreal, two years at Father Dowd Memorial Home and twenty at St. Mary’s Hospital. Here in spite of rather indifferent health at times, she was an efficient floor supervisor. In 1969 she retired to the Marian Infirmary at the Motherhouse.

As long as she was able, Sister was assiduous in praying with the sick and dying Sisters and with those whose mental faculties were failing. None of us who were here at the time will forget her prayers with Sister Mary Denis and Sister Mary Clotilda. Surely God rewarded her by calling her during retreat on April 26, when so many Sisters were gathered at the Motherhouse and could join in the prayers offered by the Community for her. At the Bible vigil on the eve of the funeral Father Connell C.Ss.R., retreat director, commented on Our Lord’s words:

“Where two or more are gathered in my name, I am in the midst of them”, and went on to say how efficacious must be the prayers of such a large group. Since Sister had suffered intensely during the last few weeks, we hope that these sufferings and the prayers of the Sisters atoned for her shortcomings and that she was admitted very soon after her death to the beatific vision.”

The funeral Mass was concelebrated on April 29th by Monsignor J.G. Hanley, Vicar General, Father Connell, C.Ss.R., and Father Cahill of Montreal, who had been chaplain at St. Mary’s Hospital during ten of Sister’s years there.

The pallbearers were Sisters M. Felicitas, M. Melanie and Margaret Killeen, Sister’s fellow-laborers for many years at St. Mary’s, and Sister M. Canice, who had been devoted to her during her declining years in the Infirmary.