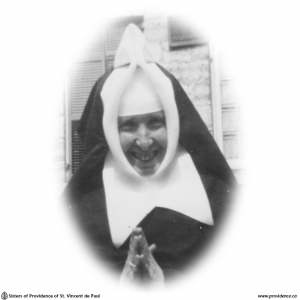 After her profession Sister went to study at Maryvale Abbey, Glen Nevis. After graduating from Ottawa Normal School she taught with success in several of our schools in the Diocese. Besides teaching she studied for a degree in Arts and for that purpose attended each of five years, a summer course given at Queen’s University.

In April, 1936, shortly before she died, she obtained the object of her labours. At the close of the August retreat, that same year, she received, with a glad heart, the appointment to go to St. Francis Xavier School, Brockville.

Sister proceeded at once to her appointed duty, occupying herself for two or three days in her classroom, making ready for the opening day. But, “In the midst of life, we are in death.” Sister had to submit to an operation. After a week of suffering, a second operation proved too much for her weak heart, and on Our Lady’s birthday, Sister resigned her soul to God.