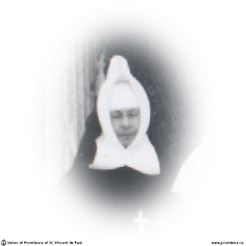 Sister Mary Eucheria of the Sisters of Providence, “Heathfield,” died on Wednesday morning January 29th, after a lengthy illness. The former Rose Garvey, a daughter of the late Joseph Garvey and Bridget Dunnigan, was born in Buckingham, Que. She entered the Novitiate at the House of Providence, Kingston, on October 9, 1912.

As a postulant Rose Garvey proved herself to be a very desirable candidate for the religious life. Pious and anxious to persevere she was admitted to profession in 1914 and pronounced perpetual vows in 1916. After her first vows and final profession, Sister spent a number of years in Kingston, and was subsequently assigned to the Western missions in Alberta. She spent a short time at Rosary Hall, Edmonton, St. Mary’s Hospital, Camrose, and the remainder of her religious life in Providence Hospital, Daysland. Here from the pioneer days until 1960, she rendered valuable service as x-ray technician and as well filled the posts of organist and sacristan.

In 1962 she returned to the Mother House, as a patient to the Marian Infirmary. On two occasions Sister M. Eucheria was admitted for treatment to the Ontario Hospital, in 1938 and again in October 1963. Her response to the treatment on the last occasion was slow, but it was still hoped by her Community that she would improve sufficiently to be allowed to return to the Mother House, where she could spend her last days with her Sisters, but Providence did not will it so. On Wednesday morning, January 29, to our great sorrow, a ‘phone’ call from the Hospital announced the death of our dear Sister M. Eucheria, which was both sudden and unexpected, even by the nurses and officials of the Hospital. The chaplain, Reverend T. Brady, noted for his kind attention to all especially the Sister patients, had visited Sister about ten minutes before and saw no change in her condition or sign of immediate death.

In the evening the remains were brought to the Mother House, and waked until the funeral on the following Friday. Sister looked very peaceful and happy in death.

Sister is survived by three brothers, and in religion a nephew and three nieces including Sister M. Clarice of our Community.

Interment was in St. Mary’s Cemetery. Reverend Father McAvoy recited the prayers at the grave.