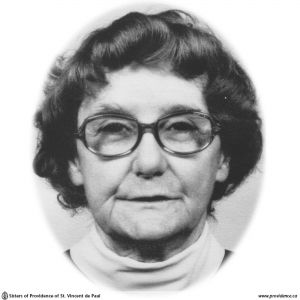 Rose Mary’s letter of recommendation from Rev. J. Seltmann, O.M.I., of St. Boniface Church, Spring Lake AB., stated her parents were among first settlers of the district. They were model Catholics and were highly respected and most generous. Rose Mary’s father, a farmer, steam engineer and carpenter, was born in Albany, Minn., and her mother in Vienna Austria.

Rose Mary entered the Sisters of Providence on July 1, 1923. She took the name of Sister Mary Eugenia at first profession on August 26, 1925. After Profession, Sister worked in all areas at the House of Providence, accompanied a senior sister who worked at the Cathedral, visited and nursed the sick in their homes and went on several “collecting” trips.

Sister trained for her R.N. at St. Mary’s Hospital in Camrose in 1928. The hospital was affiliated with the University of Alberta and she obtained her R.N. from that university in 1932. Her nursing career was initiated in Winnipeg at a “Baby Shelter” where, for three years, she took care of 35 children, newborns to five year of age. She was also in charge of the infirmary each summer at Camp Morton. For four years, she was the school nurse for Catholic schools in Brockville. Sister also nursed at St. Mary’s Hospital in Camrose, St. Joseph’s Hospital in Edmonton, and at St. Anthony’s Home in Moose Jaw.

The Sisters and lay staff, with whom Sister M. Eugenia worked, cherished her nursing skills, especially in obstetrics and her capability as a supervisor. With solid Christian charity and good will, she treated all, regardless of faith, with gentle compassionate care. Her sense of humour, patience and charity prevailed throughout her life.

After retiring from St. Anthony’s Home, Moose Jaw, in 1982, Sister went to live with her sister in Vancouver.

Sister M. Eugenia died of cancer in the Vancouver General Hospital Palliative Care Unit on January 29, 1993, in the 70th year of her religious life. The funeral Liturgy was celebrated by Rev. Les Drewicki on February 6 at St. Martin’s Church, Heisler, and AB. Sister was buried in the tiny country graveyard behind St. Martin’s Church next to the graves of her parents.