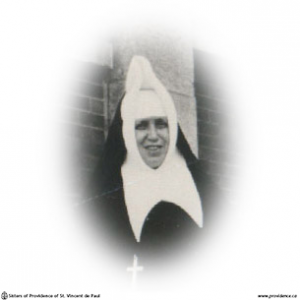 Margaret Somers was born in Gananoque, daughter of Thomas Somers and Bridget Walsh. She entered the Novitiate of the Sisters of Providence, Kingston, Dec. 8, 1897, and made profession Dec. 30, 1899. Shortly after profession she took up nursing and was among the first graduates of the St. Vincent de Paul Hospital Training School. Some years later she was chosen superintendent of nurses at St. Vincent’s until she was appointed in 1918, local Superior of Providence Hospital, Moose Jaw.

Sister was on the General Council and Assistant at the Mother House from 1930 to 1936. Then, local Superior at St. Vincent’s until 1942, after which she was again placed in charge of Providence Hospital, Moose Jaw. Ill health forced her to retire a few years later. She celebrated her golden jubilee in 1947. Although in failing health and a patient at the hospital all those years the Sisters found her very helpful for her long experience and advice.

Sister M. Eulalia was a religious of sterling character and lofty ideas who always strove to maintain a high standard in the institutions of which she had charge. She expected nothing but the best from all who came under her care or supervision, be it doctor, nurse or employee. Although exact, she was kind and appreciative, highly regarded by the Community and won the respect of others in her business contacts with them.

The Archbishop of Regina celebrated Pontifical Mass in St. Joseph’s Church, Moose Jaw, where the remains were taken on Saturday morning.  Burial was in Moose Jaw. A niece survives, Mrs. Dr. J. Hourigan of Moose Jaw. May her soul and the souls of all our Sisters rest in peace!