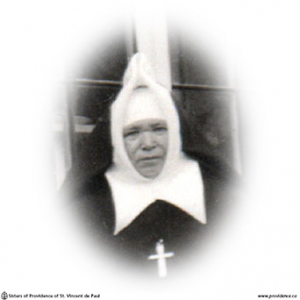 On April 13, 1940, Sister Mary Euphrasia (Mary Moynihan) passed away at the House of Providence.

Sister had spent nearly all of her religious life at the House of Providence in the care of the poor. As a nurse she rendered invaluable service to the sick in their homes. In this capacity she was especially regarded with benediction and gratitude for her services to those who came under her kind and charitable care.

Having previously suffered from a stroke of paralysis which left her in frail health, Sister suffered second attack. During a visit to the Blessed Sacrament, on the First Friday (in April), in the chapel gallery, she felt herself growing weak and sought assistance to her room. Here she became quite ill. Evidently knowing the end approaching, she accepted, with resignation, this manifestation of God’s will. She was blessed with many spiritual consolations during her last illness.