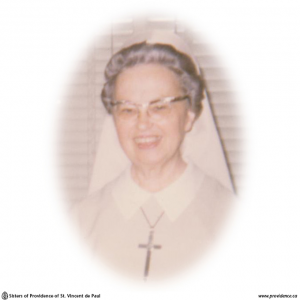 Margaret Mary was born at St. Raphael’s West, the cradle of Catholicism in the province of Ontario. Her parents, Allan Kennedy and Christine Macdonell, provided a splendid Catholic home for their ten children – 7 girls and 3 boys – and were rewarded by having three of the girls called to religious life. Jean (Sister Mary Teresita) and Margaret (Sister Mary Eusebia) became Sisters of Providence, and Teresa entered the nursing order of Religious Hospitalliers of St. Joseph.

Margaret graduated from Alexandria High School, and after a year at Ottawa Teachers’ College taught for three years in areas near her home. In August, 1922 she entered the Novitiate at the House of Providence and two years later made profession as Sister Mary Eusebia.

She resumed her teaching apostolate and for over forty years devoted her time and talents to the instruction of youth. She was exceptionally successful as Grade VIII teacher and principal, and served in these capacities in Smiths Fall, Arnprior, Toronto (St. David’s), Gananoque and St. Joseph’s, Kingston.

In 1971 she was appointed Local Superior at St. Carthagh’s, Tweed, and her three-year term in that office was marked by a series of family losses. Sister M. Teresita and three other sisters and one brother had died some years before, but from June 1973 to May 1974, four members of the family died suddenly of heart attacks. In spite of these shocks Sister Mary Eusebia, sustained by her strong faith, never lost her composure and devotion to duty.

In March of this year (1975) she was preparing for the Jubilee celebration, in which she hoped to participate with thirty-one of her Sisters – 9 Golden Jubilarians, 9 Diamond and 14 Silver. In spite of a bout of flu which necessitated a week in bed, she went to Ottawa to make a few final purchases, staying with her sister-in-law. She became very ill and had to be brought by ambulance to the infirmary at Heathfield. On March 23, as she was not improving, she was taken to Hotel Dieu Hospital. After three weeks in hospital she returned to the infirmary and thought she was well on the way to complete recovery. Again, however, she seemed to lose ground. The doctor saw her on April 25, and while she was not well during the next two days, no one thought she was in imminent danger of death. On the morning of the 28th a nurse went to her room to ask if she wished to receive Holy Communion but, as Sister did no answer, the girl thought she was asleep and did not disturb her. When Sister Mary Viola went in moments later to give her medicine, she found her lying as if in peaceful sleep, but life had fled. Her body was quite warm; she must have been dead a very short time.

An excellent teacher, a principal who was able to win the co-operation and affection of her staff, a superior beloved by her Sisters, Sister Mary Eusebia will be remembered by the Community as devoted, zealous and loyal religious.