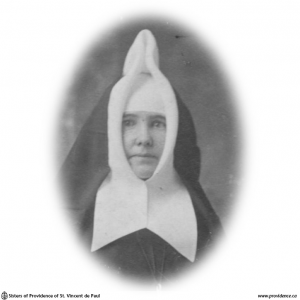 Sister Mary Evangelist, a patient at the Marian Infirmary, “Heathfield”, since 1951 died on June 2, the Feast of the Sacred Heart, 1967.

The former Henrietta Byrne, daughter of John Byrne and Catherine Bennett, was born in the rural parish of Stanleyville seven miles from Perth. This parish, which comprises a township settled exclusively by immigrants from Ireland, is favoured beyond most regions in Ontario in having three Catholic schools within its borders. It was to be expected then that religious vocations would develop in such a milieu, and the Byrne family of six daughters and one son was blessed by two of these vocations. Rose Mary, later Sister Mary Ursula, entered the Community of the Sisters of Providence in 1897 and spent fifty-three years in religious life, nine as Superior General of the order.

Henrietta after completing high school and teacher’s training taught for a few years in local schools and in 1901 joined her sister in the Community of the Sisters of Providence. In 1903 she made her profession as Sister Mary Evangelist.

For forty years she served zealously in the schools of the diocese – Kingston, Belleville, Perth, Smiths Falls, Tweed and in Trenton where she spent some twenty years. Her kindly gentle manner made her especially successful with the primary grades. She then spent a few years in light duties at St. Mark’s Convent, Prescott, and St. Francis Hospital, Smiths Falls.

The sixteen years of retirement at the Marian Infirmary were fruitful for herself and for the Community. Except for the last two days she was able go to the chapel for Mass, and as her sight failed she held in one hand a large daily missal and in the other a magnifying lens, and thus followed the prayers with the priest.

She had a remarkably retentive memory, and when she could no longer read even with the aid of the magnifying glass she could recite all her favourite prayers including the prayers of the Mass and many of the psalms and hymns of the church. She was interested in the activities of the Community and enjoyed visits from the sisters from the different missions who kept her up-to-date on Community events. Apart from her prayers and her visits she had a source of refined pleasure in her memory stored with beautiful poems which she could call up to “refresh her soul in the contemplation of things and thoughts of quiet loveliness”

Sister Mary Evangelist will be remembered for her unfailing charity – no one ever heard her speak an uncharitable word; for her patience – seldom a word of complaint escaped her lips in spite of infirmity and suffering, rather she constantly asked the Sisters to join her in thanking God for all the favours granted her during her long religious life; and above all for her devotion to the Sacred Heart. Surely it was fitting that she should die on the Feast of the Sacred Heart.

On June 5th His Grace Archbishop Wilhelm with Monsignor Lynett (a distant cousin of Sister’s) and Father Leon Pelletier of St. Joseph’s parish concelebrated the Requiem Mass. Father Downey, chaplain at Heathfield, recited the prayers at the grave. May she rest in peace!