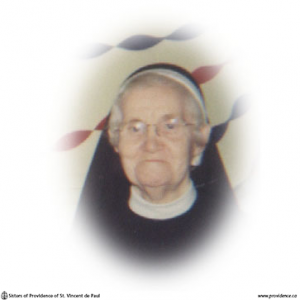 Evelyn Anne Boyle was born in Belleville, Ontario, November 1, 1893, daughter of James Boyle and Elizabeth Powers. She received elementary and secondary education at St. Michael’s Academy and Belleville Collegiate Institute. She then attended Peterborough Teachers’ College and taught for a few years in the schools of Belleville district.

Believing herself called by God to serve Him in religious life, and impressed by the example of the Sisters of Providence who had taught her and with whom she had taught in St. Michael’s Academy, she applied for admission to the Novitiate at the House of Providence in 1919. She made profession in 1921, choosing the name of Sister Mary Evarista.

For forty-two years, she carried on an apostolate in the classroom, serving in the parishes of Kingston, Perth, Brockville, Arnprior, Chesterville, Trenton, Prescott, Tweed, and Batawa. Her work of predilection, for which she was adapted by reason of her simple, humble, kindly character, was the teaching of primary grades, especially the preparation of the little ones for their First Holy Communion.

In 1961 her health was no longer equal to the strain of the classroom, but she did not remain idle. In St. Francis Hospital, Smiths Falls, for five years, she spent her days visiting the patients, and many a lonely sufferer had his spirits raised by her cheery chit-chat as well as by her words of spiritual consolation.

In 1966 frequent illnesses obliged her to retire to the Marian Infirmary at the Motherhouse, and for two years she herself often needed the cheering she had formerly given to others. On November 26, 1968, she received the Sacrament of the Sick, and on December 11th the doctor ordered her to hospital. On December 19th a message came from Hotel Dieu that she was not so well, and Mother Mary Lenore, Superior General, telephoned her sister, Sister Mary Carmella in Arnprior. Sister had spent the previous week-end with her and thought she was improved; and so decided she could delay her coming to Kingston until the following morning. We and she were shocked to receive word early the morning of the 20th that Sister Mary Evarista had died at 5 a.m.

Instead of our traditional practice of praying the Rosary each evening by the remains of a deceased Sister, we had the Community assemble for a Bible Vigil – reciting prayers from the Liturgy, singing psalms, reading passages from Scripture, and offering one decade of the Rosary.

The funeral Mass on December 23 was concelebrated by His Grace Archbishop Wilhelm, Msgr. Walsh, rector of the Cathedral, and Father Wm. Burns whom Sister had prepared for his First Holy Communion in Tweed. The Sister pall bearers were Srs. M. Grace and Electa, novitiate companions. Active pall bearers were four nephews; James Sheridan, Terence Boyle, Thomas Boyle, and Joseph Boyle.