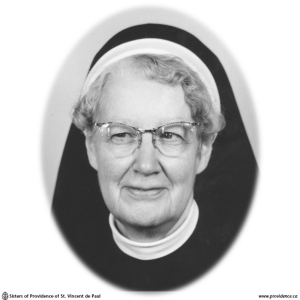 On the first day of the month of Our Lady’s Rosary, Sister Mary Everildis was called by God to her eternal reward, a few weeks after her eighty-ninth birthday. Almost sixty-nine of these eighty-nine years was spent in religious life as a member of the Sisters of Providence of St. Vincent de Paul.

Bridget Veronica Whalen was born at Stoco, Ontario – at that time a mission of Tweed – one of a family of seven entrusted to Thomas and Rose Fenlon Whalen. Her mother died when Bridget was only twelve, but her training in domestic arts was continued and a solid foundation in religious knowledge and practice was laid in the thoroughly Catholic home.

Credit for her religious calling must be shared with the pastor of Tweed, Father J.S. Quinn, who nurtured vocations among his flock. In his letter of recommendation for Bridget Whalen, he noted that there were already five young women of the parish in the novitiate at Kingston. On January 6, 1914, Bridget, along with a cousin, Anna Keilty (Sister Mary Bibiana) entered, bringing to seven the number of candidates from this area.

After profession, in February, 1916, Sister Mary Everildis was assigned to Providence Hospital, Moose Jaw, Saskatchewan. On this mission, opened only four years earlier, Sisters were caring for a small number of patients in a rented house, while they endeavoured by rigid economy and by soliciting alms to collect sufficient funds to build a hospital. The annalist of the time wrote, “The foundation was one of hardship and blind obedience.” For two years Sister Mary Everildis shared the poverty, the inconveniences and the hardship. Yet when requesting permission to make perpetual vows, she wrote:

“I still have the desire to continue the life I have chosen and I earnestly request the Community to grant me the happy and holy privilege of making my final vows. My experience out here has taught me that religious life may require many sacrifices of us; but I feel that relying on God’s grace and striving to observe faithfully my holy vows and rules, I will be able to overcome, if not all, at least the greater number, of the trials which we all experience.”

After coming to the Mother House in 1918 for final vows, she was appointed to St. Vincent de Paul Hospital, Brockville, where she had charge of the dietary department for twenty-three years. In 1941, she returned to her first mission, Providence Hospital, her term this time lasting thirty-two years.

The hospital was large now, still expanding over the years, with modern equipment and adequate staff, but Sr. M. Everildis was the same indefatigable worker and her skill as a cook, famous in her Brockville days, became also a legend in Moose Jaw.

She never took a “day off”; she would have to work twice as hard the next day to catch up, she would say. But she liked to go for a few hours with some Sister companions on a picnic – a boat trip on the St. Lawrence while in Brockville, and in Moose Jaw to Qu’Appelle Valley, and on these excursions her delight was to pack a delicious lunch.

In 1973, she retired to the Motherhouse, but not to be idle. For at least five years she spent some hours every day in the library. She assisted Sr. M. Denise, who was reorganizing the library, pasting new numbers and cards on all the books. And her meticulous nature was evident here as it was in the hospitals’ dietary departments. Sr. M. Denise remembers that when Sr. M. Everildis left her work for the day not a scrap of paper or a speck of paste remained on the table.

She observed the Diamond Anniversary of profession in 1975, when over thirty relatives, mostly nieces and nephews, joined her for the celebration.

But by this time her health had deteriorated and her mental faculties were impaired and her last few years were a time of helpless dependence and suffering in the Motherhouse infirmary. For several days in September, 1982, she required oxygen, and on October 1st it was evident that death was near. The chaplain, Father Dan Ryan, offered Mass for her in the infirmary chapel and brought her Holy Communion –a small particle of the Host. Sisters and nurses remained in prayer with her until she breathed her last a few minutes before the noon Angelus.

The Funeral Mass was celebrated on October 4th by her nephew, Father Francis O’Neill, with con-celebrants Msgr. J.G. Hanley, Vicar General, representing the Archbishop who was out of the city, and Father Ryan. The Sister pall bearers were four cousins – all Whalen’s – Sr. M. Rose, M. Clarissa, Thomassina and Gracia. Four nephews were the active bearers. Father O’Neill gave the homily and thanked the Community and especially the infirmary staff – Sisters and secular nurses – for the care given Sister in her declining years. Msgr. Hanley paid tribute to Sister’s long life of service to God and His people.

Two members of her immediate family survive Mrs. Rose Ella O’Neill, of Belleville, and Thomas Whalen, of Tweed. Both, along with many nieces and nephews, attended the funeral.

Sister M. Everildis was a perfectionist, who exacted high standards from those who worked with her. And, like most perfectionists, she had, naturally a hasty temper which she usually managed to control and to present a cheerful smiling face. So she was loved by Sister Companions, the hospital staff, and student nurses, who enjoyed their term of training in the dietary department.

In the later years of her active life, Sister endured much suffering from bouts of illness, many requiring surgery. But she endured all patiently and seldom spoke of her pain. May we hope that these sufferings and the anguish of her last few years, so purified her soul that she needed very little, if any, of the cleansing fire of Purgatory and that she is enjoying everlasting union with the Master she served to long and so faithfully.