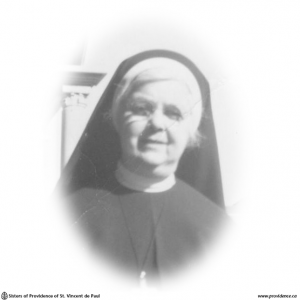 On February 23, 1982, at Kingston Psychiatric Hospital, Sister Mary Faustina died after many months of painful illness. She was 79 years of age and in the 59th year of her religious life.

In October, 1978, Sister had undergone heart surgery, absolutely necessary, her doctor said, to maintain life. The operation was considered successful, so far as her heart was concerned, but brain damage resulted and the alert, active mind never functioned normally again. She rallied to some extent and was able to assist at Mass and other spiritual exercises in the infirmary for over two years. But the mental anguish recurred, and the doctor advised that she be admitted to the Kingston Psychiatric Hospital to see if treatment could afford relief. In spite, however, of kind and efficient care by doctors and nurses, her condition did not improve. We hope that God’s call on February 23, 1982, was a happy release from pain.

Elizabeth Mattimoe, daughter of James and Ellen (Rowan) Mattimoe, was born in Toronto on March 21, 1902. When she was around one year old, her parents moved to Gananoque and Elizabeth always regarded herself as a native of that town. When she was fourteen the family went to live in Whitby, Ontario, where Sister did her High School studies. In 1922, fresh from Toronto Teachers’ College she joined the staff of the separate school in Arnprior, then, as now, under the direction of the Sisters of Providence. Whether or not she had thought previously of religious life, we do not know, but at the end of the school year, at the age of 20, she applied for admission to our Community and on August 15, 1923, was received into the Novitiate.

As a Postulant she taught at St. Mary’s School, Kingston, and after profession she was assigned to Edmonton and taught there for 41 years! Twice between 1925 and 1971 she was appointed to Ontario schools and spent a year in Perth and a year in Picton. Thus her teaching career covered 45 years in all.

The first 20 years in Edmonton were devoted to the education of the boys from our orphanage, St. Mary’s Home. Sometimes the classes were conducted in the Home, at other times in the parochial schools which the boys attended, but always as part of the separate school system.

In 1950, Sister M. Faustina was assigned to Little Flower School. This, the last of Edmonton’s one room schools, was built in 1929. At that time, Rev. Leo (later Bishop) Nelligan, rector of St. Joseph’s Cathedral, and Mr. A. O’Brien, Superintendent of Separate School, met to discuss a problem which they both deemed a responsibility. Some families of the Cathedral parish, living at what was known as Rossdale Flats, were unable to assist at Mass because of the distance and for the same reason the children were not attending a Catholic School. In 1971 the school was no longer necessary and Sr. M. Faustina was at retirement age. But, before leaving Edmonton, at the request of the school board, she wrote “Memories of Little Flower School”.

For Sr. M. Faustina was a historian and writer as well as a teacher. Columns of hers had been published in Catholic magazines, including The Catholic Digest, and when she retired to Gananoque in 1971, she continued her hobby. Her interest in history enabled her to do pains-taking research and her felicity of expression made writing a pleasure for her. She gave us memories of Rosary Hall, of St. Mary’s Home, and of her native town, Gananoque. In 1974 when St. Mary’s Hospital, Camrose, was celebrating its Golden Jubilee, she went to the hospital and remained several weeks doing endless hours of research to produce a creditable jubilee book.

In one of her books, Sister quoted words spoken by an international President of the Lions’ Club:

“It is truthfully said that no nation can be great without great memories, and the greatest of all memories for any nation is the recollection of the men and women who have contributed to its greatness.”

Sister added that the same might be said of any part of a nation, however seemingly insignificant, which has contributed to its growth. It was to preserve these memories, especially for her religious community that she wrote.

On the last page of “Memories of Little Flower School”, Sister reproduced a crude drawing done by one of her little pupils. It pictured Sister, walking ahead with veil flying and a finger pointing to the word GOD, followed by a long line of children. Underneath Sister wrote, “To me this drawing is priceless. The little artist, in his childish way, has captured and expressed the whole purpose of my life – the purpose of every dedicated educator.”

May Sr. M. Faustina’s “Memories” keep alive in our community the recollection of the women, including herself, who contributed to its growth.